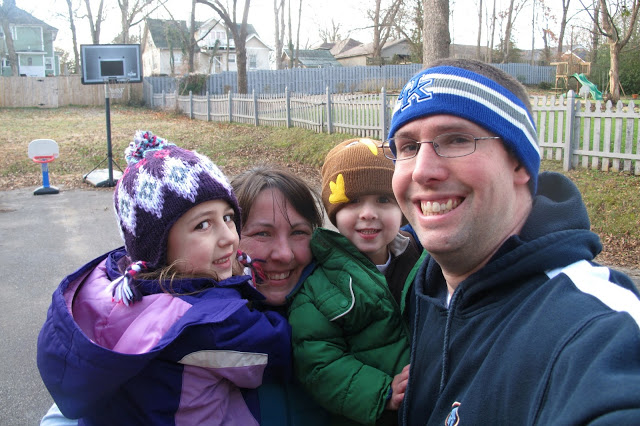 I told my daughter I like to listen to music while I run because it makes me run faster. Really, that’s not true. Actually, the music drowns out my heavy breathing, so I mentally can ignore the fact I’m exhausted and panting as I feel my feet pounding into the pavement.

There have been three Saturdays in this new year, and my family has gone on morning runs all three of them. The park across the street from our house has a trail that is a three-tenths of a mile loop. This is how it’s gone: Greg runs ahead. He’s faster and he’s choosing to run farther. I push Ben in the stroller. Cate runs and walks around the loop, offering high fives and asking questions as we each pass by her.

Plus I’ve been running a couple other times during the week. We’ve had weird winter weather around here, so a few mornings it was in the 60s. Other mornings it was in the 20s and I loaded the stroller and went to the track inside the basketball arena. Temperatures on the three Saturdays we’ve run outside were 38, 67 and 52. Welcome to Kentucky.

Greg decided to prepare for a 5K in at the beginning of March and another at the end of May. Of course, we’re slightly competitive, so I told him I’d run too. I’m not sure what I was thinking. Honestly, I don’t really like to run. I’ve gone through phases of running before {this past summer being the last time ..}, but never with an end goal in mind. I know 3.1 miles isn’t very far for you runners in my life, but my shins and thighs feel like they may give out after the 1.5- and 2-mile runs I’ve done the past few weeks.

I’m going to keep trying. Greg is convinced if I continue pushing the stroller that when I find myself running without the stroller {I have no idea when that will actually be …} then I’ll be faster by default. I think I like pushing the stroller because it’s a good excuse for not being very fast, which, honestly, I’m not, regardless of the 30-pound kid in tow. My goal is the run the 5K without stopping. And it would be nice if I didn’t finish dead last.

Better crank up that music …

Do you have any tips for running for someone who really isn’t a runner? What do you listen to so you’ll get movin’?