‘Twas a merry Christmas around here! And even though we still have some celebrating to do with my family this weekend, I wanted to share some of the highlights from Christmas Day.

But, first, I have to tell you. I loved Christmas Eve. We had two plans change and ended up spending the afternoon and evening together. Just our God-made family of four. And I loved it.

We went to redeem some Chick-fil-A gift cards my kids’ got in their stockings from Gran-Gran in our first family Christmas the weekend before and happened upon a Jesus birthday party. We love Chick-fil-A anyway, so the party hats, party blowers, and live saxophone music were bonuses! Then we headed to the once-daily showing of the old-fashioned 2D version of “Monsters, Inc.” Yes, I’m the mom who doesn’t do 3D movies and takes her kids to movies that already exist on DVD. They don’t the difference and like the theater.

We picked up some deliciousness from Panera Bread for our sick friends and our own Christmas morning breakfast, delivered said goodies, and then ate Mexican for dinner. Really, who doesn’t want cheese dip for Christmas Eve?

The afternoon and evening were simple. And just right. 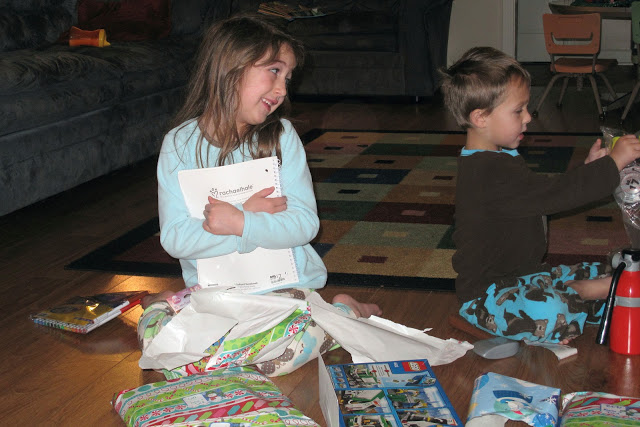 And then there was this moment {pictured above} on Christmas morning.

I took Ben shopping for Cate earlier this month. Once I steered him away from the “Cars” stickers and Matchbox cars and trucks, he picked out a spiral notebook with a cat on the front, some Sesame Street and Tinkerbell stickers, and markers. Clearly, he knows her well, maybe even better than I do. Honestly, I thought the cat notebook was funny and random. She loves notebooks and generally has one near, but she hasn’t expressed a particular fondness for cats.

At least not publicly. Until she opened her gift, that is. “He knew I loved cats.” Um, yes, apparently he did.

Of course, while she was gushing about her present, Ben was enthralled in his own and totally ignored her. 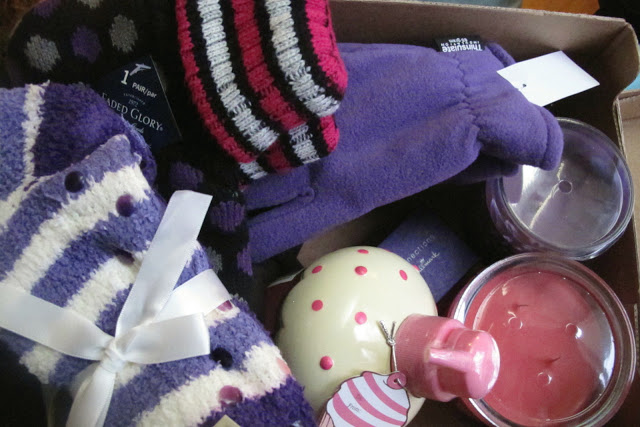 Cate helped Greg pick out my stocking stuffers, evident by all the pinkness and purpleness. That’s a cupcake-shaped soap dispenser, if you were wondering. 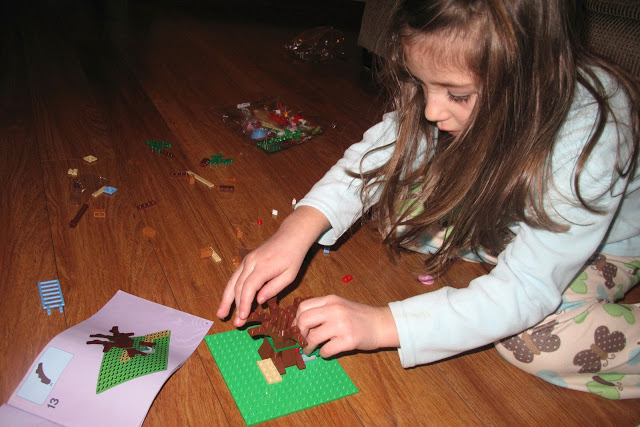 Legos have come a long way since I was a kid. And, yes, I loved seeing my kid build this tree house. I helped some. But it was more moral support than anything else. 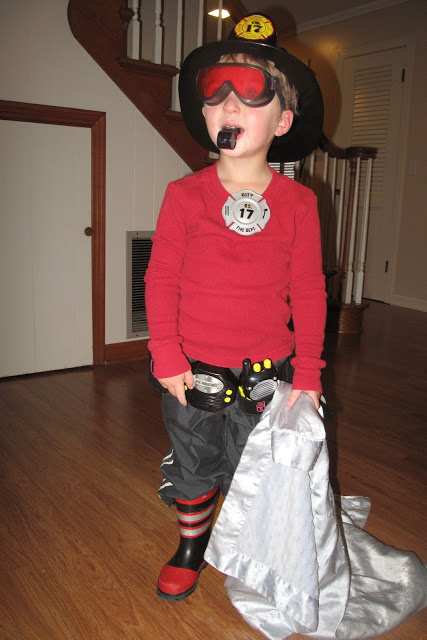 It’s no cat notebook, but Cate wanted to get Ben a fireman dress up outfit. He already has a fireman rain boots and coat, so she was happy to find these fireman accessories when we browsed Amazon last week. I do love that my daughter picked out my son’s favorite gift.

Over the river and through the woods to grandma’s house we go! Actually, we walked next door to Greg’s grandparents’ house for lunch, but, hey, the sentiment is there.

And so were all nine of their great-grandchildren, including my two … 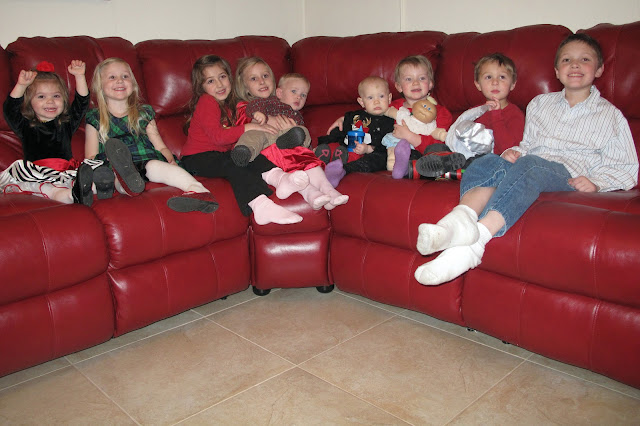 We did another picture of them lined up in birth order, but I liked this one better. In case you were wondering, that’s nine kids 8 (almost 9) years old and younger. Three of them were born in 2009. 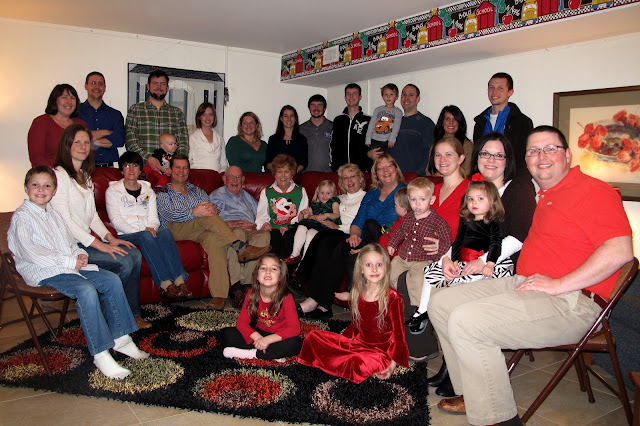 That’s the whole crew that has descended from Anna Faye and Tommye D Taylor … or at least married into the group. Just one of Greg’s cousins and her husband were missing; they joined us later in the day. 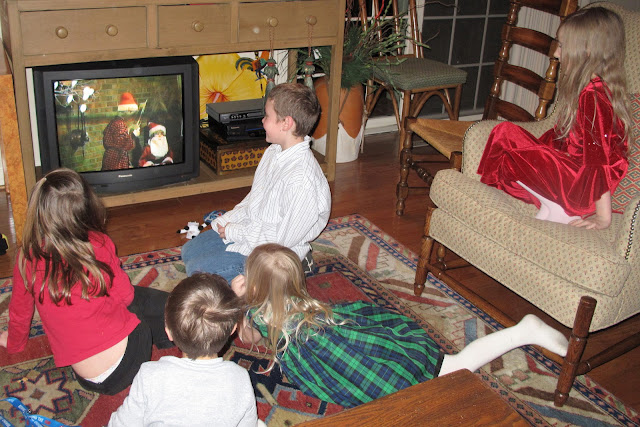 My mother-in-law broke out the 1987 home movie that shows the homemade version of “The Night Before Christmas” my husband, his two brothers, and three girl cousins performed when they were some of our kids’ ages. Our kids loved it. So much they watched it three times.

Meanwhile, we were under a blizzard weather advisory. The evening rain and sleet turned to snow overnight, leaving us with a White {Day After} Christmas. 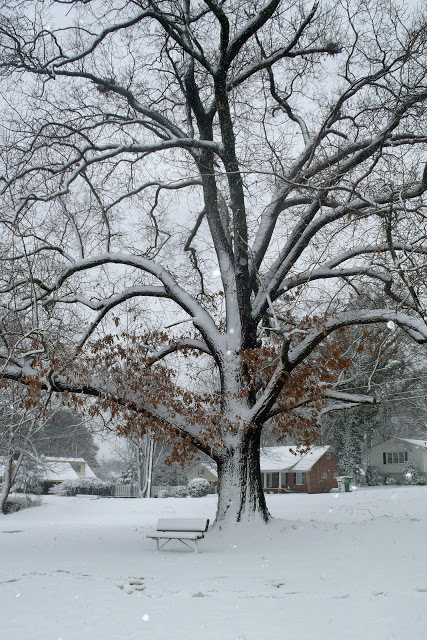 The kids loved sledding down the hill at the park across the street from our house. I couldn’t believe we ended up being outside an hour. That’s far longer than I ever wanted to be out when I was a kid. 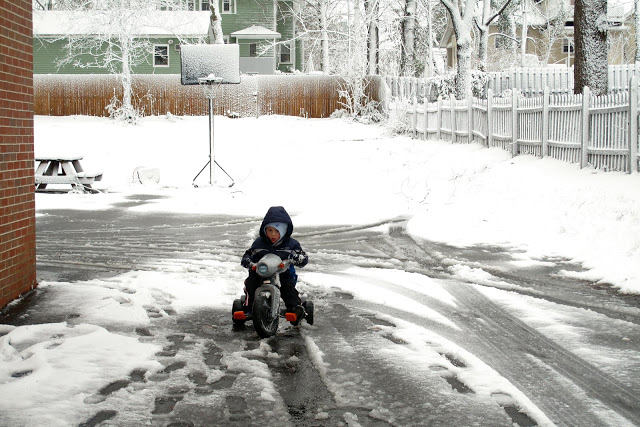 I hear driving conditions were rough. Truthfully, we didn’t leave the house all day or really ever get out of our pajamas, except, of course, to apply extra layers to stay warm for that hour yesterday morning. 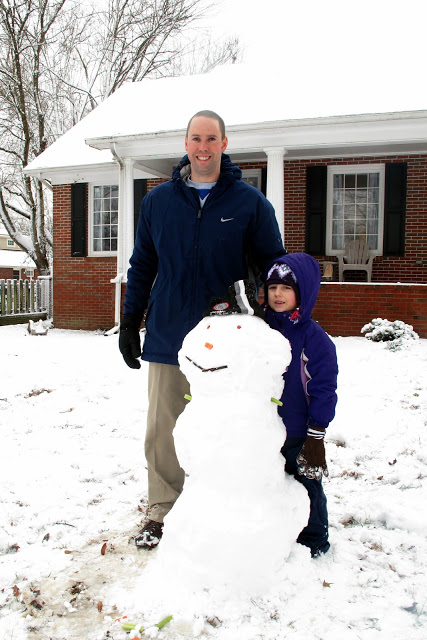 And then there was Frosty with his vegetable facial features and very short celery arms.
Tell me about your Christmas. May your days be merry and bright, and may all your Christmases be white.
________
Want more? Subscribe to get “Insights” in your inbox. Or follow me on Twitter or Instagram.