In the midst of a busy weekend that followed a busy week, our family of four headed on a short road trip to Clarksville, Tenn., where Murray State was playing football on Saturday night. It’s just more than an hour from our house and it’s home to Blackhorse Brewery, an all-time favorite restaurant of mine. Plus, the timing made it a good escape before another busy-with-good-things week.
So, we ate a delicious dinner, waited out the sprinkling rain, realized we needed cash to buy game tickets, returned with our layers and blankets to watch the game. The Murray State-Austin Peay rivalry in football isn’t nearly as hyped as basketball, but it was still a fun night. And, well, there was beer cheese and delicious pizza unfortunately named Rocky Top beforehand.
And, hey, as always, the kids were entertaining … 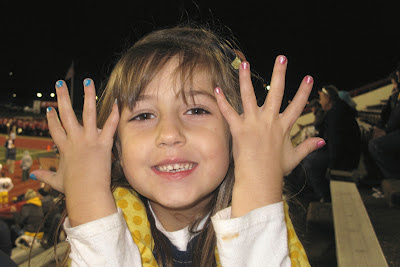 Cate quickly found a friend of hers and spent the majority of the game playing with some girls. When I saw her friend’s mom walk back from the concession stand with hot chocolate, I was certain Cate would be requesting some soon after. So as soon as she started up the steps toward us, I nudged Greg and said, “Here she comes to ask for hot chocolate.” And I was ready to get her some. But she didn’t actually ask. Instead she said, “Mom, can I get my nails painted?”

Yes, at a football game. A friend of her friend had nail polish.

For the record, she got hot chocolate later and proceeded to accidentally spill some of it. But she had lovely nails. 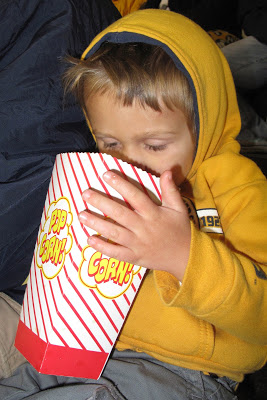 Ben just wanted some popcorn. Until he heard my crinkle of the package of peanut M&Ms I had in my sweatshirt pocket. Then he needed a few of those too. 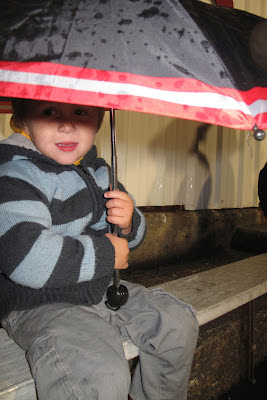 The rain held off most of the game, but I’m pretty sure Ben was happy when the drops started falling because that meant he got to hold the umbrella. When he wasn’t using it as a weapon or bouncing it to the beat of the opposing marching band, he really was pretty good with it.