I’m not sure how we fit everything we did into our weekend, but I’m glad we did because it was full of fun times.

4:45 p.m. Friday
After four mornings of Marketplace 29 A.D. with 136 kids and volunteers from 30 churches {seriously!}, we had a family night to give parents and siblings a chance to experience some of the marketplace themselves and hear more about what their kids had been doing this week. It was officially from 5:30 to 7:30 p.m., but I was there from 4:45 to 8:15 p.m. 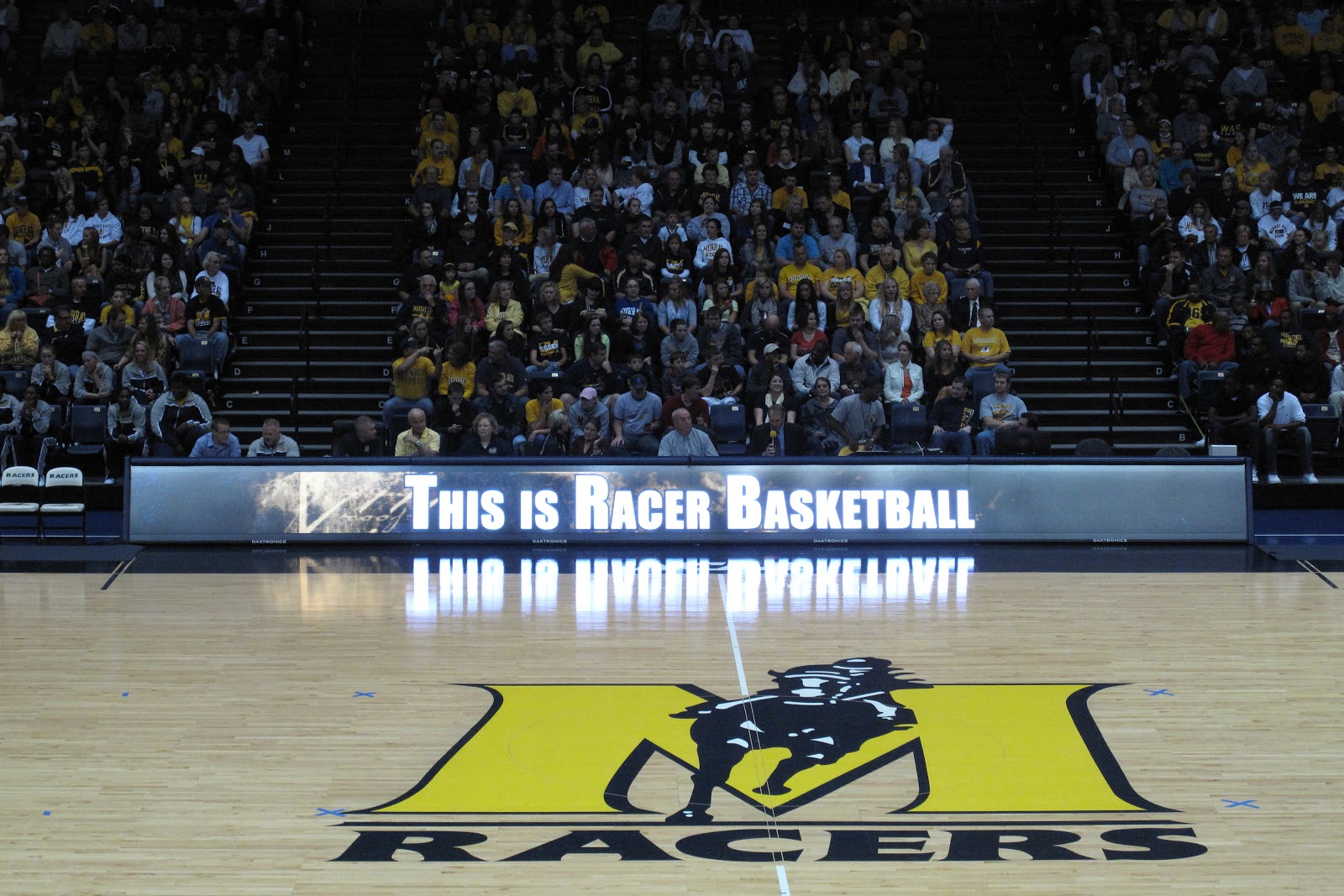 9 p.m.
After we finished wrapping up an encouraging, powerful week in a make-shift first-century marketplace, Greg and I went to Racer Madness while the babysitter did home and watched TV while our kids slept. I’m finally in baseball mode here at the end of that season {more on that in a minute …}, but I still haven’t gotten over Murray State’s last basketball season so I’m happy for another college basketball season to begin. Granted, no team will probably ever compare to the 2011-12 Racers in our hearts.

We saw the guys play with the returning players and were entertained with 3-point shooting and dunk contests. Isaiah Canaan {not surprisingly} won the 3-point shooting contest after initially tying Stacy Wilson, who was impressive. And we won free tickets because of it! Before the contest, the players randomly drew a section number and whoever won, each person in that player’s section received a voucher for two free tickets to the Nov. 24 game against Old Dominion. So, from Section 108, thanks for your precise shooting, Isaiah!

THIS is Racer basketball: 38 conference regular-season and tournament championships. 15 NCAA appearances. 25 consecutive winning seasons {tied for fourth in the nation}. And so it begins again …

11:24 p.m.
Despite walking in the house ready for bed, I got caught up in the end of Game 5 between the Cardinals and Nationals. If you didn’t give up on the Cards and go to sleep, you understand. With one out remaining in the win-to-advance game, the Cards managed to finish their comeback, first tying the game and then scoring what managed to be two winning runs.

After some celebratory texting with friends, I went to bed around midnight.

8:45 a.m. Saturday
My college friend Laura, her husband and their three boys — 3-year-old Atticus and 1-year-old twins, Sawyer and Townes — arrived for the day of MSU Homecoming festivities. 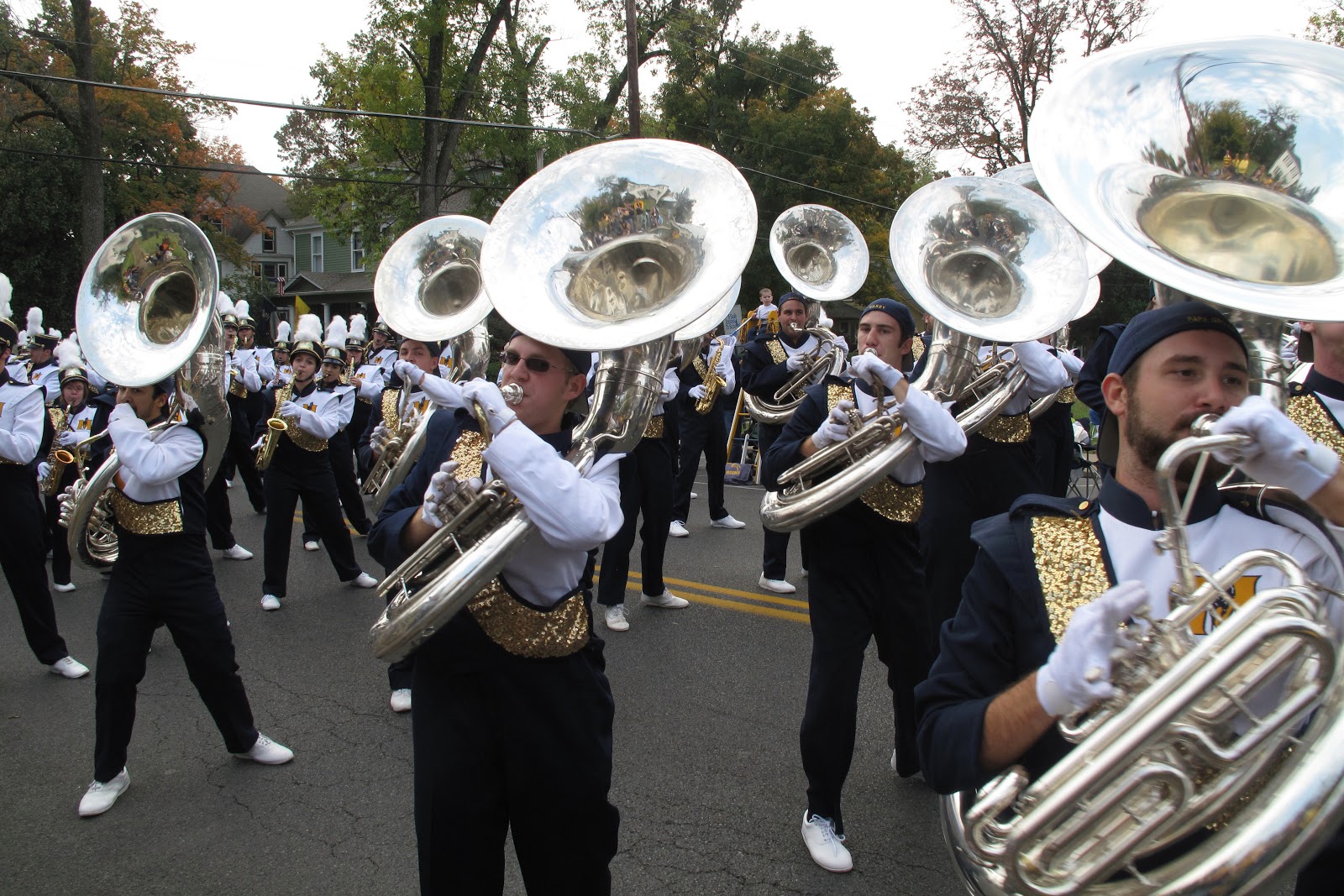 9:30 a.m.
My favorite of this town’s many parades begins. And, as always, it’s entertaining …

I’m telling you, if you are raised in this small town of ours, you are an expert parade-watcher by age 5, if not earlier. It’s not even surprisingly if you’ve walked {or been pushed!} in a parade before you’re 2. There are parades for Fourth of July, Homecoming, Veteran’s Day and Christmas. All that candy collecting is serious business … 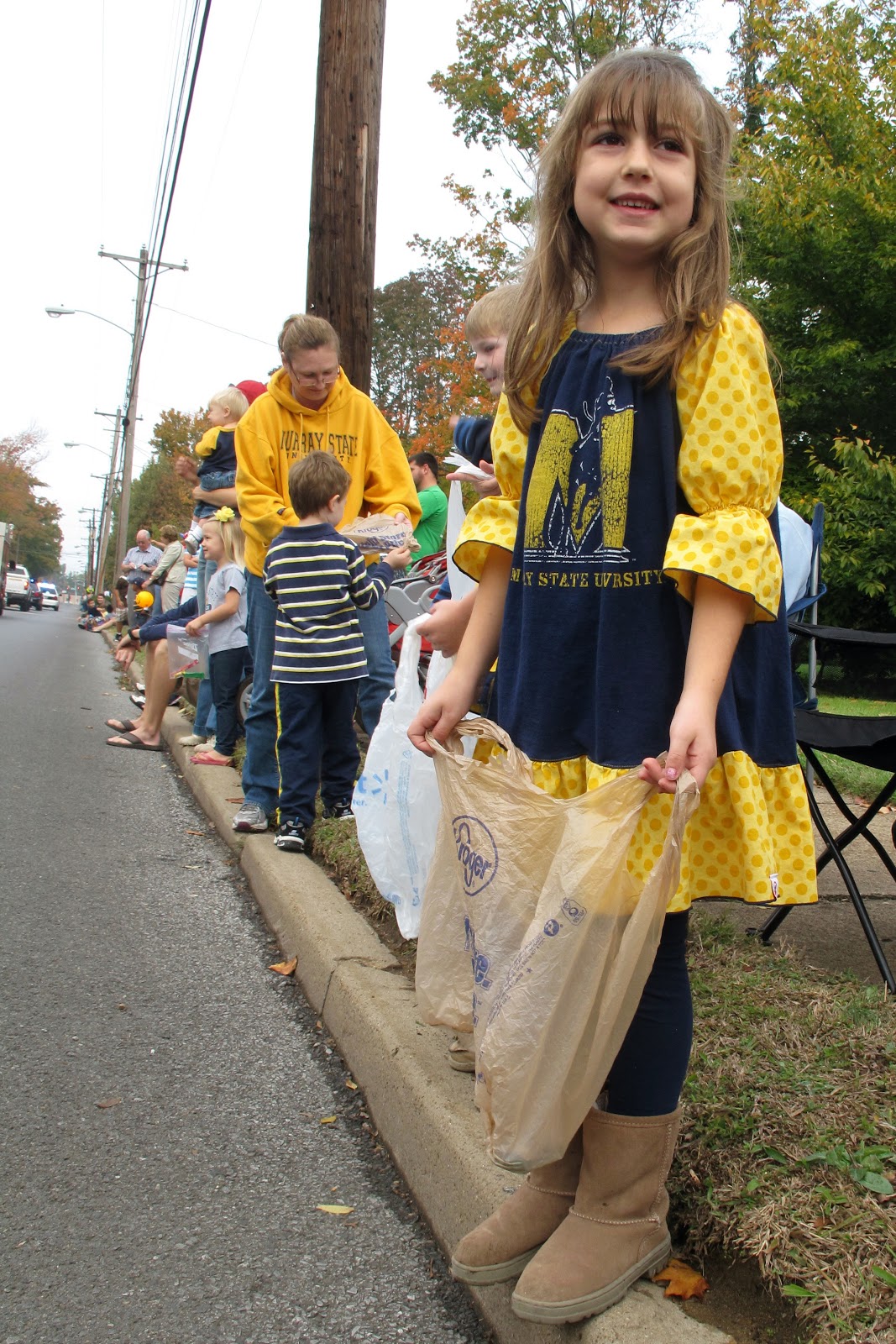 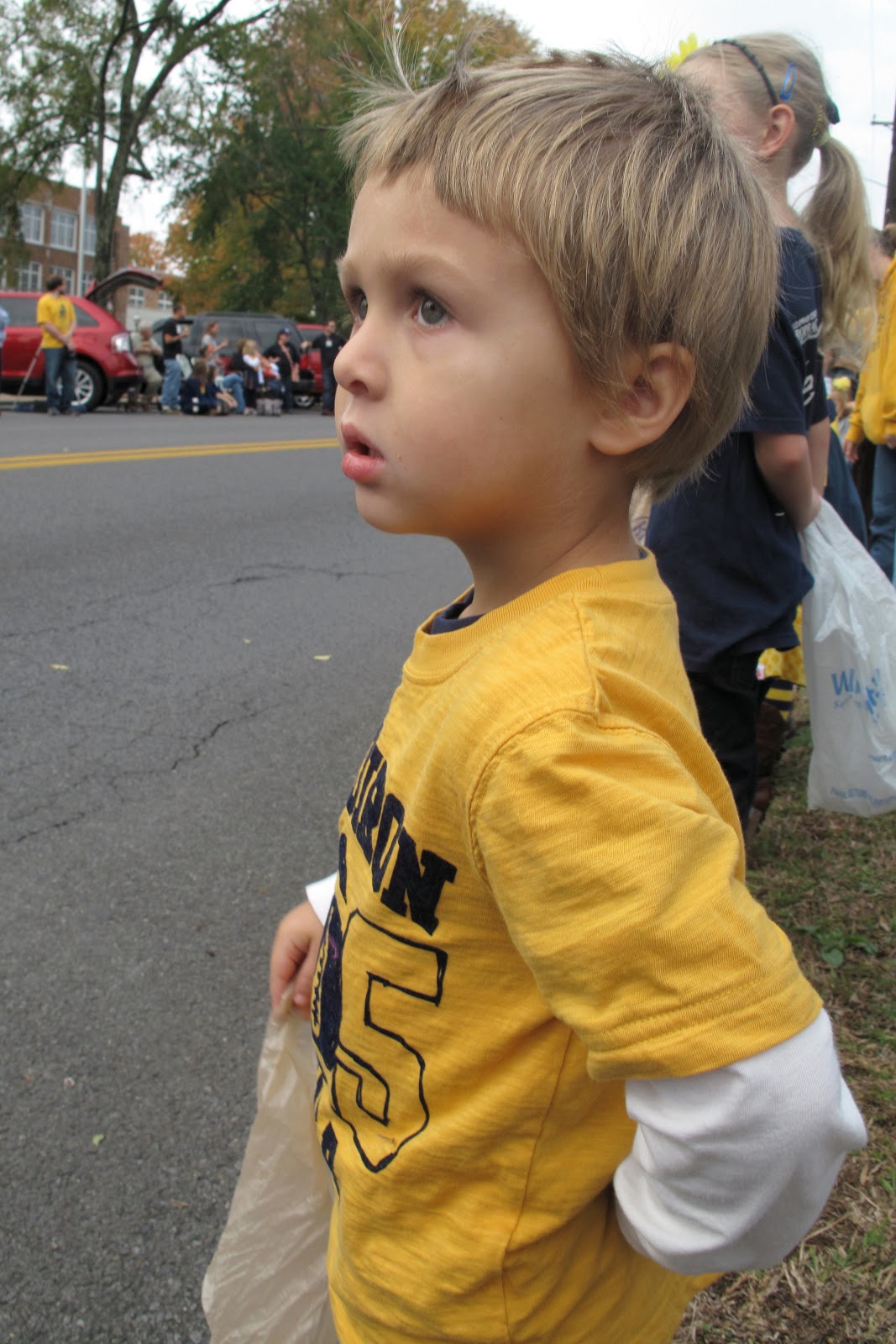 11 a.m.
With our friends, we ate lunch at Los Portales. There was much conversation, laughter, salsa and cheese dip. 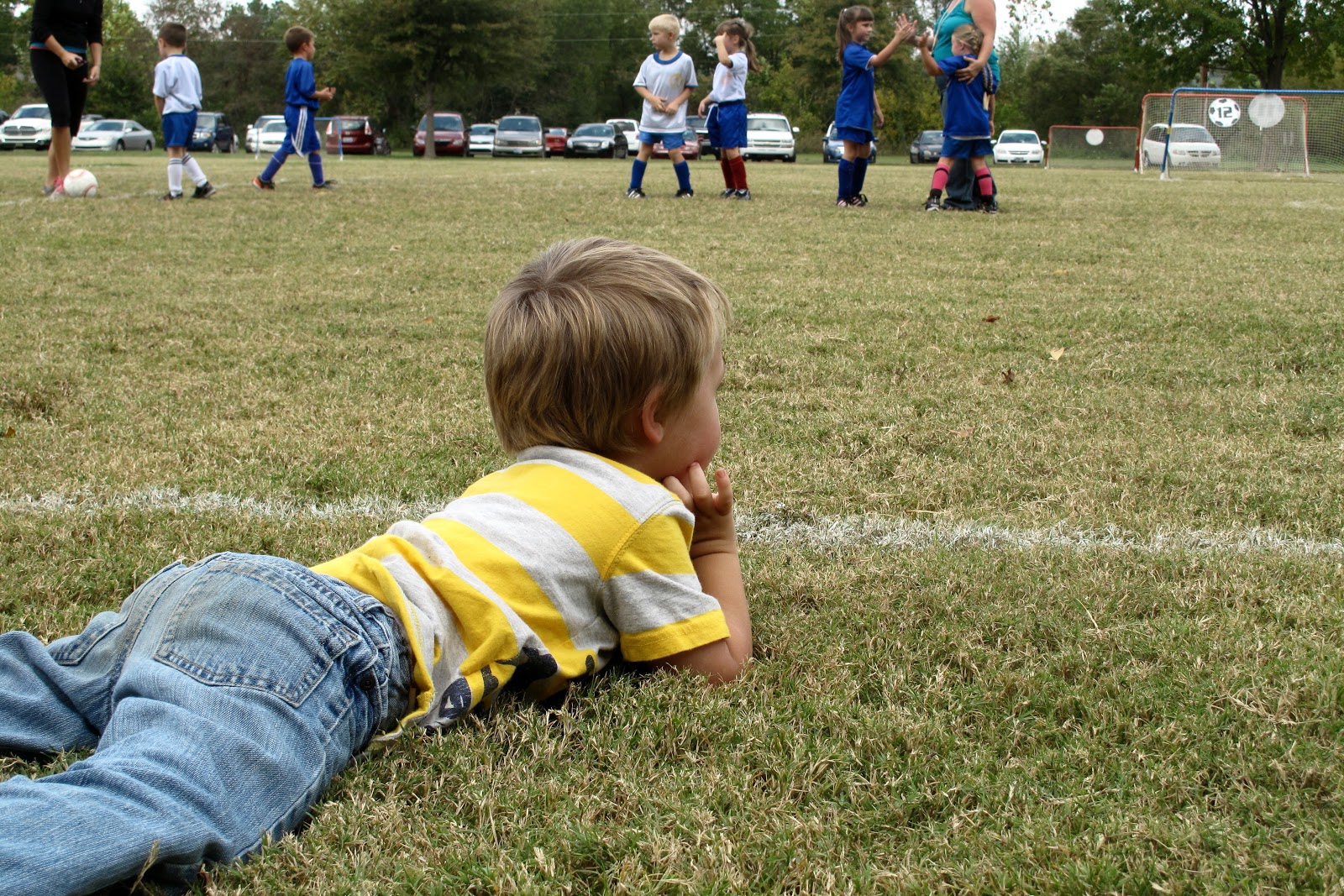 3 p.m.
We walked in right as the football game between Murray State and UT-Martin was starting. It was an exciting game that didn’t involve much defense on the part of either team. The Racers fell behind, but they had a chance toward the end. Unfortunately, it wasn’t enough: 66-59 Skyhawks.

6:30 p.m.
After meeting back up with our friends and leaving our combined five kids 5 and younger with my generous mother-in-law, the four of us adults headed to Murray Christian Fellowship’s alumni party. {Just for the record, the two youngest were already down for the night …} It’s a tradition of catching up, remembering, laughing and eating in a way that takes us back to our days in this campus ministry that was an essential community in so many of our lives.

So. What did YOU do this weekend?