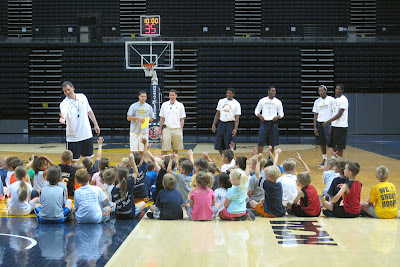 Cate is learning how to play basketball this week at Murray State’s camp. I’m pretty her crush on Donte Poole had something to do with her signing up. Or maybe she saw how fun the guys were when they came to school. Perhaps it was those things mixed with the atmosphere of the Racer games she loved this season. Whatever the reason, Greg and I were excited our girl wanted to go.

That’s her sitting on the right edge of the lane toward the back in the navy shirt and little blue shorts. There is no telling why she’s raising her hand. When I was there for the first hour or so this morning, she raised her hand pretty much any time doing so was an option. Really. She raised it when Coach Prohm asked who was cheering for the Heat. And then when he asked who were Thunder fans.

Honestly, I’m not sure my girl even knows what the NBA is. Much less these two teams with weather-related mascots. And I’m certain she doesn’t know they are getting ready to play for the championship. Perhaps we’ll talk to her about it tonight. And about how you have to pick a side because not everyone wins. {That truth will be completely undone later this week when everyone on her t-ball team and every other team gets a trophy …}

Anyway, so, back to basketball. We’re excited she’s old enough to do this. She doesn’t fear new situations like I did my entire childhood. She’s eager to volunteer and participate and make new friends. Her attitude and demeanor make me proud.

Of course, her little brother and our friend Caroline wish they were old enough too … 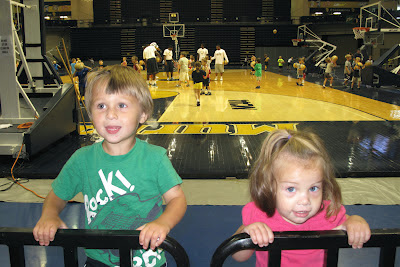 And, speaking of being old enough, my girl lost her first tooth while at camp this morning … 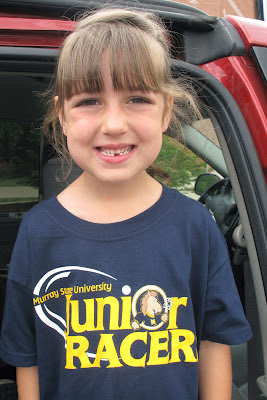 I love that toothless smile. I’d post a picture of her and her tooth, but, well, she threw it away “because there was a trash can right there and I didn’t have a pocket.” That’s what I get for going to the grocery store while she was at her three-hour basketball camp.

Even though her tooth was already loose, I thought maybe a crazy pass from a fellow 5-year-old may have knocked it out. Nope. “I was wiggling it and just pulled it out,” she said non-nonchalantly. Apparently it only bled a little.

And then it was back to basketball for my independent, brave girl who certainly is growing up.