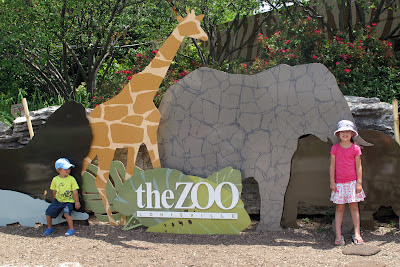 Even though small-town life has won over my heart that once believed living in a city was for me, I do like visiting places that have a Target, fun children’s activities we don’t usually get to do, Archivers, and a wide selection of restaurants. Louisville has those things and all kinds of memories for me. So spending less than 24 hours in the city near my childhood hometown while Greg had a continuing education class was added to the calendar with little hesitation.

My friend of 21 1/2 years lives just down I-64 near Lexington so I got June 19 on her calendar too. And then her entire family of four was attacked by some poor-timing stomach bug. Of course, I was disappointed Katie and I weren’t going to spend the day together, but I decided not to call other friends who live in the area and embrace a day with my kids and no real agenda.

After dropping Greg off at his class, we killed some time at Target before the zoo, which was in the original plan, opened. Both kids love animals. Cate had her notebook, purchased earlier at Target’s $1 bin, and camera ready to document our trip to the zoo. {We like zoos … Cincinnati, St. Louis, Nashville, Dallas …}

There were a couple kinks {the train wasn’t running and the spray park was closed for two days of maintenance on what my sister-in-law told me was Louisville’s hottest day so far this summer}, the but the kids and I had a good time. I love the way our life is so intertwined with community, but spending hours truly being with my kids was what I needed even though I didn’t know it.

We laughed often and talked much. 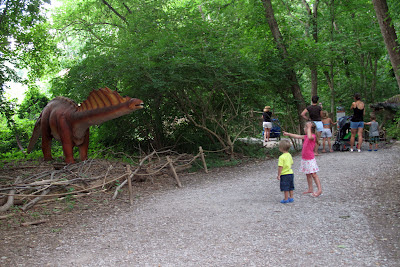 One of my favorite stories from the day is how after saying “go see dinosaurs” every time he saw a promotional sign for the special exhibit, Ben was scared of the dinosaurs that moved and growled. When I say “move,” I really mean their heads slowly turn, their eyes blink or their tales move. They don’t come running into the path or anything very dramatic. But after growling back from a distance, Ben wouldn’t get near them and certainly wouldn’t pose for a picture. {See the distance he created in the photo above.} Toward the end of the route, a dinosaur sprayed water and Ben freaked out, cried and ran into my arms. Inside I found much humor in my fearless boy being scared of mechanical dinosaurs.

We walked the route a second time, and he mustered some courage. Some. And then he went back to talking about the dinosaurs.

After 3 1/2 hours of pushing the double stroller, which the kids were in and out of, up and down hills through the zoo, I decided maybe we should find some {cool} relief. So we regrouped in the mini van, where Ben feel asleep before we left the parking lot, and headed for Archivers, where I stocked up on scrapbooking goodies.

Even though the best laid plans sometimes don’t actually happen, some days turn out to be just what my heart and soul need. And, really, it’s a relief to know I’m not in control.