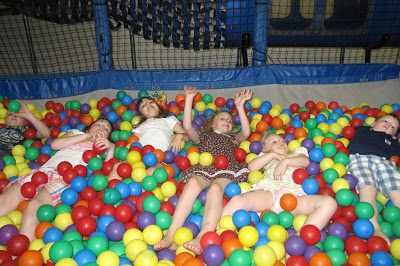 I never thought I’d want to have two birthday parties for one kid in one day. Turns out, it’s a great alternative for our family. First up was a family party at Pagliai’s Restaurant, the local pizza place that has an indoor play area. All but one of my kids’ seven first cousins were there. {Kieran, the baby of the bunch, was sick …} The literally played so hard they sweated. 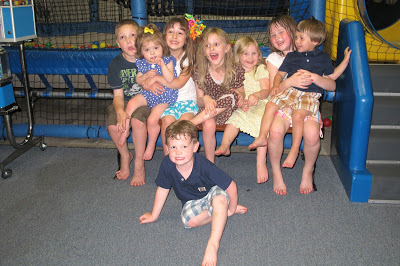 Then after a brief rest time, Cate had 11 friends over for a sweet afternoon. Literally. You can’t really have a Strawberry Shortcake-themed party without sweet treats. Courtney made a delicious strawberry cake. I also had lemon bars, raspberry and blueberry muffins, and strawberries, oranges, blueberries and raspberries. Oh, and leftover cookies from our earlier party.

{You do get it, right? Strawberry Shortcake’s friends are Lemon Meringue, Blueberry Muffin, Raspberry Tart and Orange Blossom …} 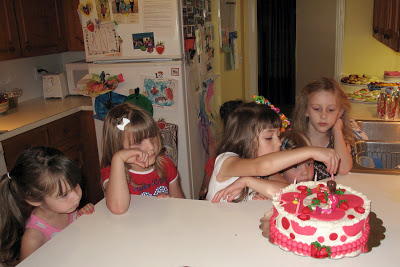 I’ve probably mentioned before, but this above pictures makes me think it’s worth mentioning again: My first-born child is … well … all first-born child. Independent. Determined. Always with plan. So, yes, she put her own candles in. I think she got some help from a couple of her friends too. 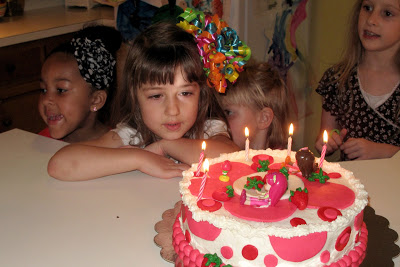 Cate picked out a picture of a cake some months ago {she’s been talking about her Strawberry Shortcake cake since Ben’s birthday …} for Courtney to have as a guide. We only needed a smaller cake, so Courtney improvised some. When I showed Cate the picture Courtney texted me the day before the party, the birthday girl said, “That’s even prettier than the other one.” 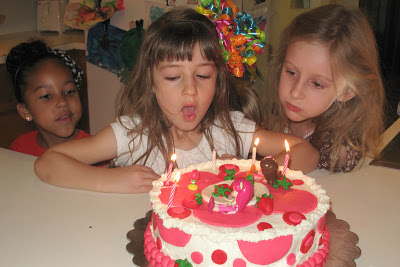 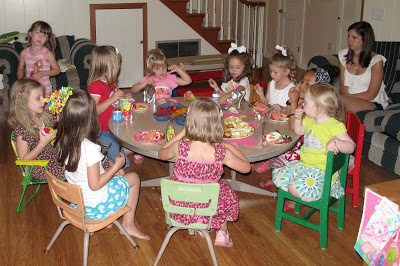 Cate’s friend Malaika sat close to me while Cate was opening presents and asked, “Is this a celebration?” I told her it was. We didn’t say anything else about that, but I was thinking later about how celebration is a good word for the first weekend of May that blurs my birthday and my daughter’s. There’s often multiple cakes, more than one party, meals shared, cards in the mailbox that end up hanging in our kitchen, and memories made.

And, to me, that’s how birthdays should be.

When Cate opened presents, she was so enthusiastic and sincere. Earlier in the day, when she opened her gift from John, Christine and Mae Rose, her eyes got big and she said, “This is what I’ve been looking for.” This was a nail kit with fake nails. Sure it was cute, but, really, she’s been looking for this? I had no idea. But that gratefulness continued throughout the next party. “I needed new markers.” {OK, so need isn’t exactly the right word choice. Still, the enthusiasm is precious.} She called Strawberry Shortcake and My Little Pony playsets “cool.” She was thankful and appreciative. And knowing her little mind, she’ll remember who gave her what.

Earlier in the week, Cate opened a birthday card from her “new Mimi” — Katie‘s mom whose grandkids call Mimi — and said, “I can’t believe it! It’s George Washington!” when she found a $1 bill inside. She put it in her piggy bank and I don’t think I’ve stopped laughing. And I bet I hear the story again when we do something with the change and small bills stored in a purple, ceramic pig. 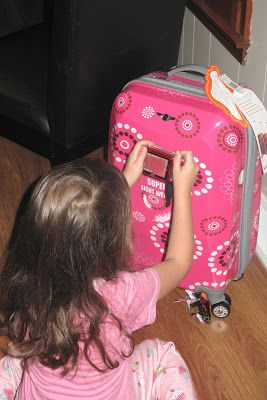 OK, so, one more present story. We gave Cate our present this morning, her actual birthday. Wrapped in a bag that somebody else gave her yesterday, she pulled it out and said, “A real camera. It’s perfect!” And then she went over and snapped a close-up picture of the suitcase Gran-Gran gave her yesterday.

No, birthday are not about presents. But they are worth celebrating because they mark our lives. And for this 5-year-old life I’m particularly grateful.