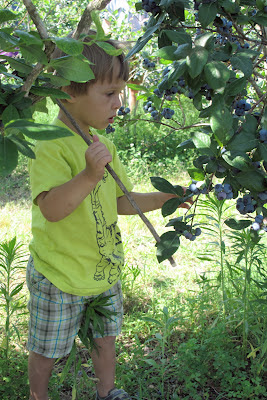 My boy is officially 2 1/2 today. And all boy and all 2 he is! In honor of his half-birthday he knows nothing about, I thought I’d share 30 things about him.

1. Ben sleeps with lots of stuffed animals in his toddler bed. Right there are 14, a few of which are rather large, and a pillow pet for his head. Add his little self and his blanket {affectionately referred to as “nigh-night”} and that bed is full.

2. He doesn’t sit very long, but he does love to swing and will cuddle on the couch with his sister to watch a movie.

3. If you ask him what color something is, “blue” or “geen” are always his first answers.

4. He prefers snacks and drinks to meals. Of course, snacks are eliminated when meals are ignored.

6. When he knows someone is getting ready to pray, he’ll clasp his hands together and say, “Dear God,” in the sweetest voice possible.

7. He sleeps about 10-11 hours at night and takes {usually} a two-hour nap in the afternoon.

8. People warned me my second-born boy child wouldn’t talk as much as my first-born girl. Technically, that may be true. But my boy talks. Constantly. I suppose he has to keep up with his sister.

9. Words that end in Ks {walk, milk, book, etc.} sound like they end in Ts when Ben says them. Same with words with Ks in the middle {Luke, etc.}.

10. He wants to sing “Twinkle Star” {which he calls “Kintle Tar”}, some verses of “Tractor, Tractor” {including the made-up verse about how a combine actually harvests wheat …}, “Jesus Loves Me,” “Jesus Love the Little Children,” and possibly other songs before bed. Every night.

11. Typical little brother, Ben wants to do whatever Cate does and has no idea he’s 2 1/2 years younger.

13. Two of my friends each have girls he adores. One is 9 months younger. The other is a year older. Perhaps this should worry me for his future. Seriously, though, he’s going to be a good friend to people of all ages.

14. I’m not sure what Ben is going to do in the future, but whatever he chooses will be filled with much joy and energy.

15. When I’m on the phone, he’ll ask “Who that?” If it’s Grandmom, Gran-Gran or Daddy, he wants to talk and usually does so loud enough in the background that said person can hear him.

16. He likes to swim, throw rocks into the lake, try to climb trees that are too tall, run barefoot outside, chase birds, and catch then kiss fish.

17. If he sees a picture of Murray State’s Ed Daniel, he says, “Head!” with much enthusiasm. I’m pretty sure he really thinks that’s his name, but the fact Ed has an Afro makes the nickname even funnier.

20. Ben surprises me sometimes. We haven’t been to the emergency for an injured limb. I was sure we would have been before his second birthday.

21. And he gets excited if he gets a shirt or pajamas or shoes at a store. Who knew?

22. He likes to kiss people on the lips.

23. Tickling is his love language.

24. He likes books. We prefer he look at board books when we aren’t looking.

25. Most of the past semester, he’s say, “My turn school?” when we walked Cate into preschool. Yes, he’s signed up to start in August. It’ll be two mornings a week.

26. He’ll play any game with a ball, sometimes uses a bat or golf club more like a hockey stick, and says “Cardinals” when he sees any baseball on TV.

27. With that, he’s sad he’s not the one playing t-ball this summer.

28. Ben can get a shirt dirtier quicker than anyone I know.

29. When Daddy comes home, he runs toward to the door with enthusiasm and open arms.

30. He likes to be moving. In the car. On a place. Up on a bulldozer. In the stroller. On the swing. Outside on his feet. In the house on his feet. Always moving.