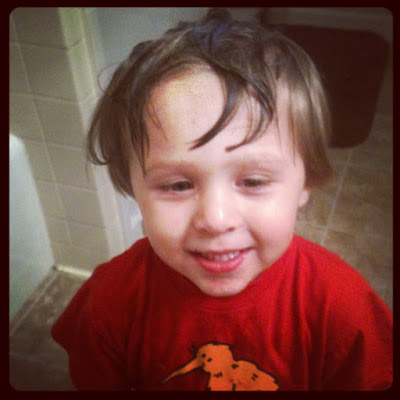 That’s adventurous Ben with wet hair from playing
in the toilet, which is unrelated to the following story.

I’m certain my boy will end up in the ER at some point with some kind of injury. And, really, I thought last night was the night.

Greg and I were hanging curtains in our lake house. Cate was in the other room watching “Willy Wonka and the Chocolate Factory.” And Ben was going back and forth, occasionally mischievously walking on the back porch, which was in our line of sight from the door over which we were hanging curtains.

I heard my 2 1/2-year-old boy crying and I immediately assumed a sibling dispute was happening in the other room. Thinking it was just another one of those moments, I mumbled, “What happened?” Cate, being the typical first-born child, updated me: “Ben poked himself.”

Um, poked himself? That seems like too many tears for a self-induced poking.

I couldn’t watch. But, in hindsight, I should have taken a picture.

When Greg took a breath from laughing at me, I suggested he come take care of removing the fishing hook from Ben’s mouth. Yes, seriously, my husband was laughing. At me. Apparently at first glance my fisherman husband knew it wasn’t a big deal. Um, yeah, OK …

Turns out, the fishing hook wasn’t actually piercing skin. Rather it was poking him in the gums right under a tooth. There was a little blood. But no gaping holes. Or ripped lip. Or danging fish hook unable to be removed without medical assistance.

Yes, these are the scenarios that went through my mind as soon as I saw the fishing rod attached to my boy. Well, I thought these things after I screamed.

I rinsed his mouth out. I mean, it was a metal hook that had been used for catching fish. And he seemed fine, other than a little shaken up. And, really, it should be noted Ben doesn’t get shaken up easily from physical accidents. {The emotional distress can be a whole different story.}

After Greg and I finished hanging curtains, Ben went with his daddy and sister fishing. And the hook caught some crappie and blue gill. Much better than a little boy’s mouth.