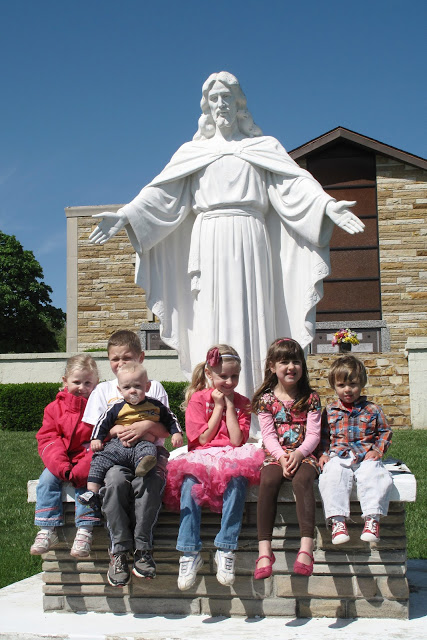 Really, I’m not sure there is a better picture of Good Friday.

The kids wanted to be near Jesus, the statue, after we had some time at their Granddaddy’s grave. Elijah was 6 years old when Gary passed away unexpectedly. Ethne was 4 1/2 and Cate was a month away from turning 3. They have some memories of their Granddaddy who adored them, embraced them, encouraged them, and wanted the world for them. But Ben was only 4 months old and Evelyn turned 1 the same day. Mae Rose {who wasn’t at Jesus’ ceramic feet today} and Kieran weren’t even born.

Honestly, it makes me sad these kids don’t have their Granddaddy. {He was good at cuddling with those granddaughters like he did while camping in April 2008. One of my favorite Granddaddy pictures comes from June 2009. Cate gardened with him in September 2009.}They won’t know first hand how he never met a stranger, was wise and not shy about sharing his knowledge, and how he would help anyone, even — maybe especially — people who may not have deserved it.

But Greg reminded me his dad left a legacy. I’m proud of my husband who lives intentionally and courageously, often following in the footsteps of his dad. There is hope in knowing Gary lived a life worth celebrating and is now truly with Jesus. And not just some statute. He’s with the living Jesus who died on a cross weighed down with all our human ways. It was a brutal death, but we remember it on a day called Good Friday because without that single death, we wouldn’t have life, the abundant life God gives us. And it was good because that wasn’t the end. Three days later, the stone was rolled away and the tomb was empty. Jesus rose from dead.

“Our old way of life was nailed to the cross with Christ, a decisive end to that sin-miserable life—no longer at sin’s every beck and call! What we believe is this: If we get included in Christ’s sin-conquering death, we also get included in his life-saving resurrection. We know that when Jesus was raised from the dead it was a signal of the end of death-as-the-end. Never again will death have the last word. When Jesus died, he took sin down with him, but alive he brings God down to us. From now on, think of it this way: Sin speaks a dead language that means nothing to you; God speaks your mother tongue, and you hang on every word. You are dead to sin and alive to God. That’s what Jesus did.” –Romans 6:6-11 {The Message}

So, sure, I wish my kids and their cousins had their Granddaddy. But we can celebrate his life as we live ours because that’s how Gary lived. He gave and loved and worked and played and learned and read and sang and hugged and listened and talked and forgave. And our kids will know it. {Cate and I have had more than one conversation about heaven since Gary’s “heart stopped working.”}

We visited Gary’s grave earlier today, like we did last year. The kids put fresh flowers down. We prayed. We reminisced. His two oldest sons talked about business. The kids ran and laughed and danced and played. Peggy corralled her family, especially the little ones, like Gran-Gran does best. 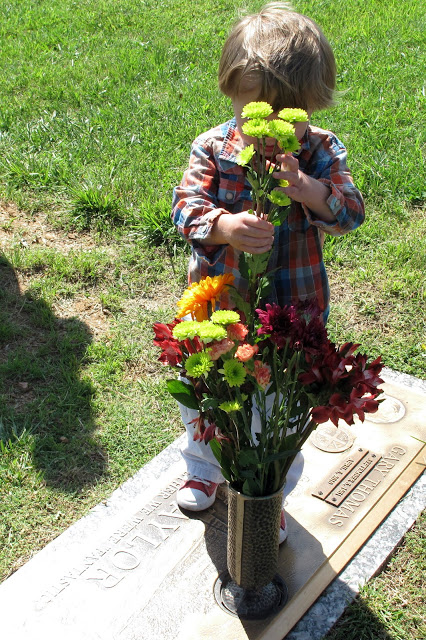 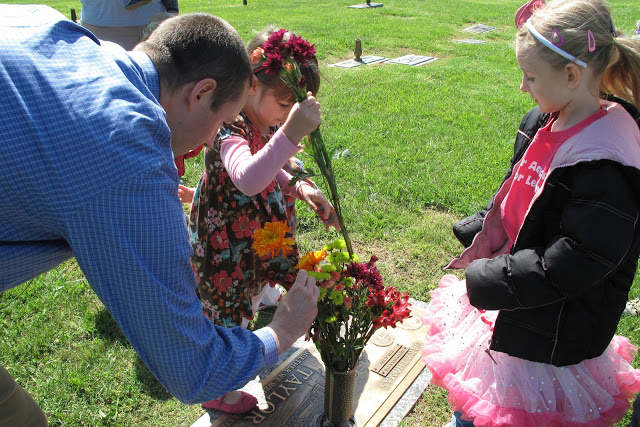 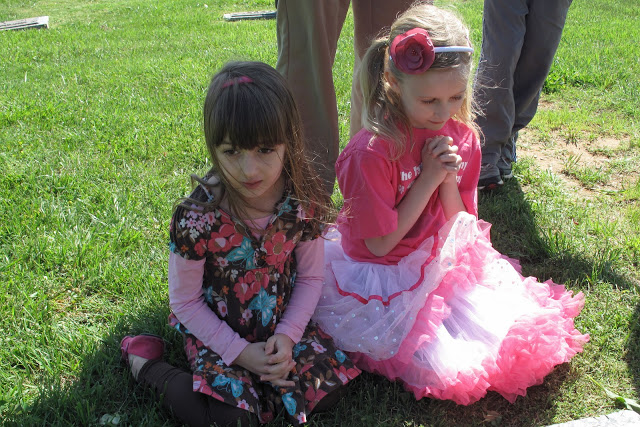 And that’s hope, the kind of hope Jesus gives when we come to his feet, figuratively, unless, of course, you have a statue of our savior nearby. May your Good Friday be blessed. Remember it doesn’t end here, and that’s why it’s good.