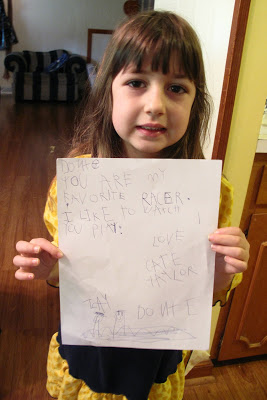 We established she has a crush on Donte Poole. She is a mixture of proud, excited and nervous when she hears his name, especially when he scores. When she hears anything about the Racers, her next comment is usually about Donte Poole. Or just #11. And she often uses his whole name.
{Read the first installment about her crush.}
So when her preschool sent home a note saying some Racer players were coming to play with the kids, she was ready to meet Donte. Again. She talked about it so much that 2-year-old brother Ben was saying, “Meet Donte” yesterday morning as we were getting ready to go play with the Racers at Cate’s school.
What would you do if you were preparing to meet your crush for the second time?
Cate decided to write a note. Really, it’s a two-sentence love letter.

Donte,
You are my favorite Racer. I like to watch you play.
Love,
Cate Taylor

And included on the bottom was a picture of Donte and Zay Jackson playing together. 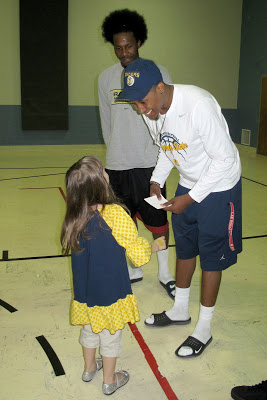 Seeing her give the note to him and watching him listen to her every word was sweet and honest and innocent. And I loved being a mom and witnessing this moment. I hope she remembers it. If not, I’m documenting so we can tell her all about it when she’s grown up, probably with some other crush that makes her daddy and me nervous. 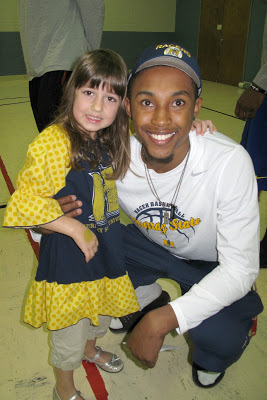 Unlike their first week last month, Cate was brave this time, standing right next to Donte. She still doesn’t grasp why he isn’t going to play at Murray State anymore. But we wish him well and thank him for helping our girl love basketball.

During the play time with the players, another Racer may have captured her heart. The kids were divided into four teams for a relay event that concluded with guys who are given college scholarships to play basketball shooting household items. See Ivan Aska there under the basket? Yeah, he’s shooting a roll of paper towels. Anyway, Cate was on LaTreze Mushatt’s team.

Admittedly, she was disappointed she wasn’t on Donte’s team. But I reminded her that LaTreze would be back next year and he wears #4. Something about the number being the same as her age {although she won’t be 4 for much longer …} is cool to her. That seemed to help. 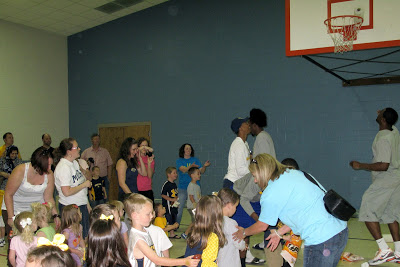 Then Team LaTreze won the relay event, which lead to this awkward “We’re #1!” pose … 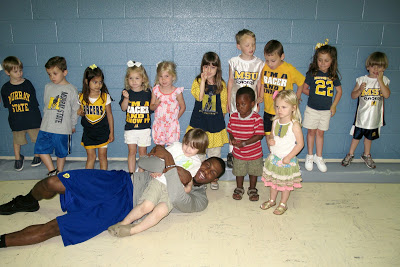 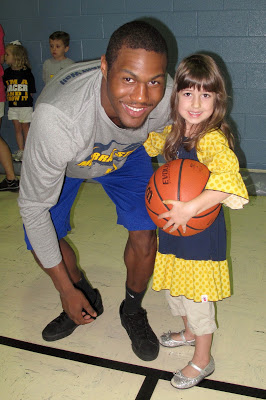 See, perhaps LaTreze is winning over her Donte-lovin’ heart. I can’t blame her for choosing #11 as her favorite, but truth is we want her to like basketball next season when she’s 5. I’m thinking she’ll be cheering on #4 anyway.
_______
Yes, Ben was with me. And, yes, of course he wanted to meet Donte too. Last time he gave the players fist pounds. This time he just ran toward them, fully expecting them to pick him up. Or at least bend down to his level … 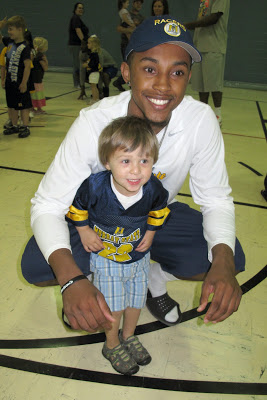 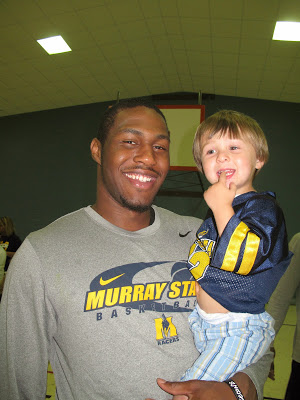 LaTreze was great with the little ones. He asked Ben what his name was and Ben pulled on his shirt and said, “Murr Tate.” Um, well, yes, that’s what your shirt is about. But what’s your name? He just pulled up his shirt and laughed. I have no idea what he was really thinking, but he seems proud about whatever it is. 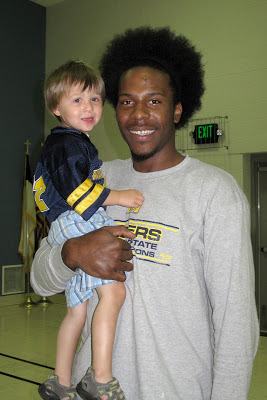 Ben ran, like full-force ahead ran, toward Ed Daniel. And Ed scooped him up. After the picture, they walked around and Ed even lifted Ben up toward the basketball goal, helping him shoot. I asked if Ed babysat, but he just laughed. I guess that’s a no.

These guys are finished playing basketball this season. Two of the four are seniors and are going to leave Murray sooner rather than later. They gained national attention this year. They won more games than any other Murray State team. They were ranked higher than any of the Racer teams who came before them. Yet they still came to a preschool and played, laughed, hugged, and smiled with a bunch of kids who have loved them from a distance.