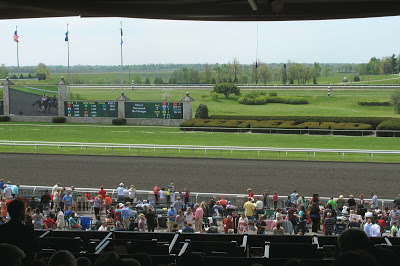 One of the most vivid is climbing over and under the bars of the general admission boxes at Louisville Downs, a now-defunct harness racing track, while my brother, sister and I would collect losing tickets. Yeah, looking back, I have no idea why.

But horse racing is part of my Kentucky-born-and-bred childhood. One of my first best friends loved horses, was destined to be a vet, and continues to follow horse racing even though she moved to the West Coast a decade and a half ago. I was born two days before Spectacular Bid won the Kentucky Derby. I cleaned up after the Oaks and Derby {those are two consecutive big race days, for you non-Kentucky folks} to earn some service hours for my high school Beta Club. Best moment of that weekend in 1997 was watching my friend Dustin sell hats made from newspapers to drunk people for $1 each. Oh, and I met Mitchell Anderson and Jerry O’Connell  and saw Melissa Joan Hart trip up some stairs at the 2002 Kentucky Derby, where I covered parts of the day that had nothing to do with horses when I worked at The Associated Press.

I watch about two minutes of horse racing a year and that happens on the first Saturday of May. I might watch two other races in May and June if there is a Triple Crown threat.

But I like going to race tracks occasionally. And turns out I married a guy who wrote a book about horse racing for an elementary school project and can dominate any trivia quiz involving Derby winners.

I’m sure those trees where I grew up grew up themselves in the years that have past since I last was at Keeneland. My brother-in-law {who does follow horse racing} organized a family trip to Keeneland on the day of the Bluegrass Stakes. That’s what prompted our road trip this past weekend that included other adventures.

Horses are entertaining for people of all ages. My kids like animals, whether they are in a zoo or running around a track. In fact, they even like statues of extinct animals. My kids aren’t the only ones who cheered for the “Racers” racin’ around the track. We were part of the largest crowd {40,600, give or take …} in Keeneland history.

And, yes, Ben made the Racers connection and chanted the R-A-C-E-R-S cheer, complete with some bom-ba-bas that are supposed to sound like the pep band. He certainly had the right idea, even if he always starts it T-R- … who knows what he’s actually spelling. Even so, back to racing … 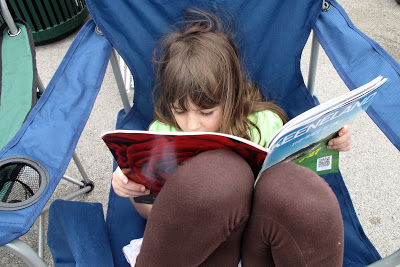 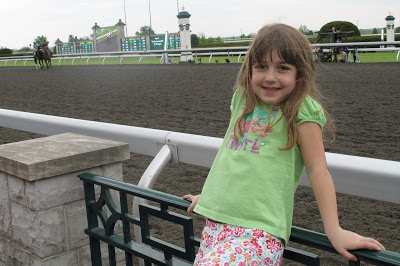 What about you? What do you think of watching beautiful animals race around a track? Have you even been to Kentucky? If not, Keeneland is a good place to start.