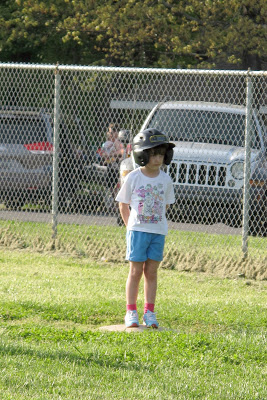 Greg and I reached some parenting milestone last night. We organized our first t-ball practice. Greg is the coach. I’m his administrative assistant. I was expecting chaos, but, really, it wasn’t chaotic. While Greg has coached older kids on a baseball team before, he’s never coached little ones who are just beginning. Thankfully, I can organize most anything, especially make a spreadsheet of everyone’s information and practice times. Our assistant coach has a daughter who has played before, so that experience is helpful too.

We make a good team.

And these kids seem to make a good team.

Not good like they’re going to hit homeruns. But good like they listened and played and acted like they wanted to come back next week. And, actually, they won’t be hitting homeruns off the tee because there are some special t-ball rules.

No outs, for one. And they’ll run one base at a time as their teammates take turns hitting.

I’m guessing they’ll all get trophies at the end of the season, which is another blog for another time. But, I have to say quickly, that’s so not life. Not everyone wins all of the time. You’re not always the best. There’s usually someone better. And there’s almost always someone worse. And in the real world we all have to get along. With and without trophies. 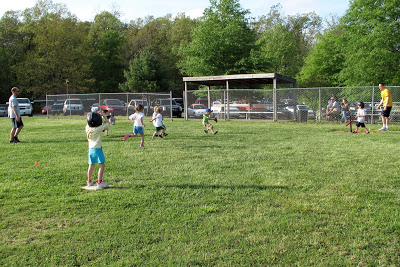 Seeing those kids {like a herd} go after the ball was adorable and hilarious. And I’m guessing those adjectives will apply to many other moments this season. But it’s going to be fun.

Something about coaching and participating in t-ball makes me realize we entered a new phase of parenting. And, truthfully, I’m excited to be here. If Ben wants to play as badly as he did when I delivered the news it was Cate’s t-ball practice and he’d have to wait to play, then we’ll be in this season for awhile. Pulling up the bleacher seat and staying awhile is fine by me. Trust me, my husband believes he can coach anyone in anything. And he’ll try to legitimately win a trophy in the process.