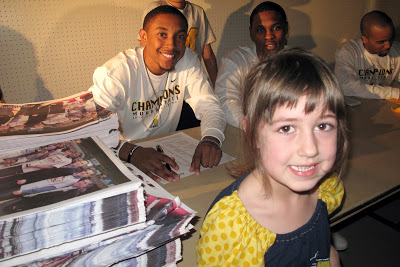 My girl has a crush on Donte Poole.

And, frankly, I think it’s adorable.

She notices when his name is mentioned during a game and likes to watch him score. She was overwhelmed with emotion when he was named the MVP. She notices the number 11 — like in the grocery store frozen food aisle — and relates it to his jersey. She doesn’t understand why he has to graduate and not play any more games in the CFSB Center.

Yet she was a nervous wreck when even thinking about meeting him. So much so, she hid behind Greg’s leg during her first impromptu opportunity. I wasn’t sure how it would go when I told her we could meet him at the Racer pairings party.

We got to Racer Arena yesterday afternoon and the line was already formed to meet the players. We stood it in and gave her periodic pep talks: “He’s just a regular guy. A new friend. You are good at making friends.” “He likes to meet kids. He’ll be glad to see you.” “Just say, ‘Hi, I’m Cate.’ and give him a five.” Between the pep talks, I realized I didn’t bring anything interesting to have the players sign. Good thing some newsprint team pictures were available for unprepared moms like me.

She got out “Hi” out and managed a five. She stood and painfully grinned for a picture with Donte. And then she moved on until she said Jewuan Long, who she also managed to meet, greet with a five, and stand in front of for another picture before proclaiming she was finished because she met her two favorite players.{Side note: She took both photos to share time at school today. And apparently she talked quite a bit about her experience. Crush material, I’m telling you.}

Meanwhile, Ben gave all the players fives and pounds. 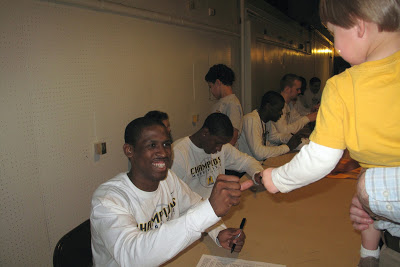 And he wasn’t responding to the players’ interactions. He stuck his fist out and said, “Pound?” all the way down the table. The guys were good sports. They laughed. They high-fived. They pounded.

The Racers are a sixth seed and play Colorado State at 12:15 p.m. {Eastern} Thursday in Louisville to open the NCAA Tournament. The game is on CBS, so you should tune it, even if it means taking a long lunch break, and root on the Racers.