I have a confession before I tell you about our weekend: I can’t stop listening to this song …

I know. It’s an R&B song. And that’s not what I usually listen to. But, seriously, I bought it on iTunes this afternoon and I have already listened to is six times. And that doesn’t count the two times I listened on YouTube.

Here’s the thing. “The World’s Greatest” reminds of the Racers.

In case you’ve been living in a cave that doesn’t get ESPN, our Murray State Racers are 30-1. In fact, they were the first team to get 30 wins. Kentucky did it the next day. But, still, my small-town team is having a season we’ll never forget. They’re going dancin’ in the NCAA Tournament, and we’re rooting for a Louisville, Nashville or Columbus (Ohio) first-round site. Seriously, how fun would that be?!

So, back to our weekend. We went to Nashville. We had a peaceful, sunny drive down, but tornado sirens were going off when we got there. Instead of going to eat at Old Spaghetti Factory like we wanted to, we just went on the arena. We figured a concrete building was a safe place. Indeed. We ended up in the basement with other Racers fans. 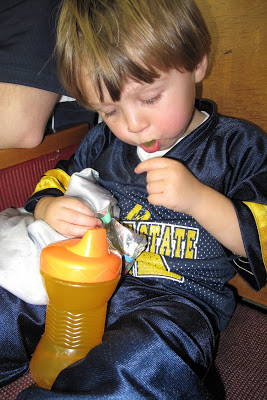 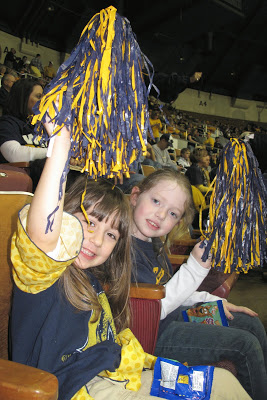 She especially likes to cheer for Donte Poole, as evident by some of my tweets from the weekend:

Commentary on sporting events is my favorite use for Twitter.

Anyway, back to Nashville. MSU played Friday in the semi-final round against Tennessee Tech and dominated, coming away with a 78-58 win.

There was much blue and gold there, especially Saturday when tornadoes were no longer a threat. Word is of the 6,600 fans, all but several hundred were MSU fans. It was the conference championship in the hometown of the other team. Yep. A little surprising, even conflicting with Tennessee State’s spring break, but we’ll take. it. 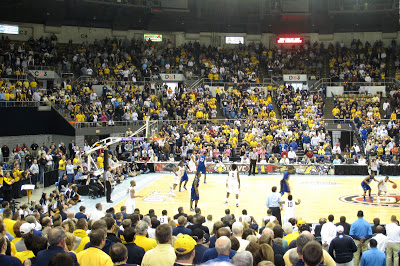 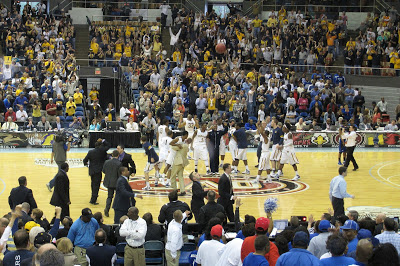 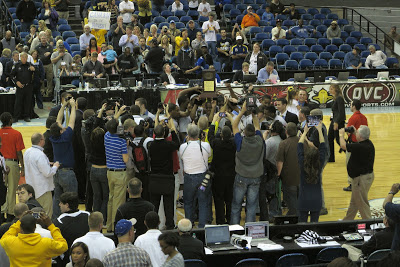 OVC Champions! And I got to hear “The World’s Greatest” for the second time after first hearing it on Senior Night.