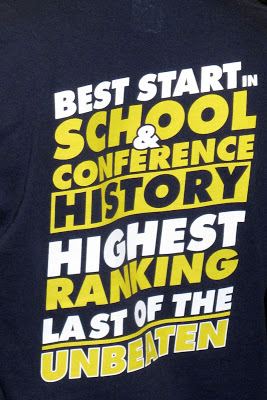 Our Racers lost last night. I wasn’t necessarily anticipating that specific loss, but a loss was bound to happen at some point. But, really, to say a team’s first loss came in February is impressive. And now the Racers sit at 23-1, which is still {tied for} the best record in Division 1 men’s basketball.

All of what the back of that T-shirt pictured above says remains true. Best start in school and conference history. Highest national rankings ever. Last of the unbeaten teams.

And so better all those other fans who have been selling out the CFSB Center. I’m going to be disappointed if there’s not a packed house again tomorrow night. It’s rivalry game. The regular-season conference championship and seeding for the conference tournament, which sends the winner to the NCAA Tournament, are on the line. And we’re proud to be Racers.

A game was lost. But nothing more. This university for which we cheer is still doing good things for this small town in which we live. And the coach and his team are still setting a good example of how to play on the court and live off the court.

Each time I read an article on Coach Prohm, I like him more. Here’s a favorite quote from an article I read this week: “Because if you don’t stay on your wall — your passion, your mission, your life’s work — you will fail, you will not succeed. If you do finish the task at hand, and I don’t know where that will take this team this year, the glory goes to the success of God.”

And, really, it’s fun to be a Racer fan. 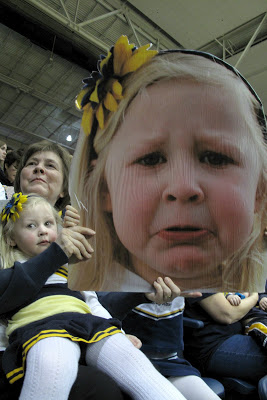 Sister-in-law Angela made this pouty-face fathead to hold up when there are calls with which we aren’t pleased. It got used last night, and all who saw it seemed entertained. Wonder if the refs noticed? 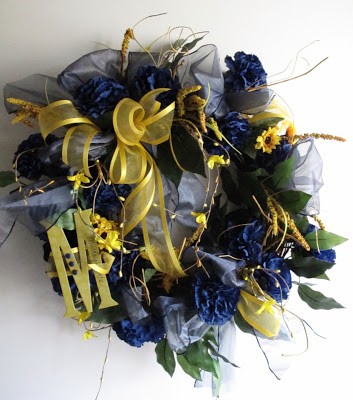 And it’s been a fun season to live in a small town that loves its basketball team. I even got a wreath made for my front door at a local florist. I did add the M.

Earlier this week, Ben and I went to a Racer-themed storytime. Those little kids were so cute in the blue and gold … 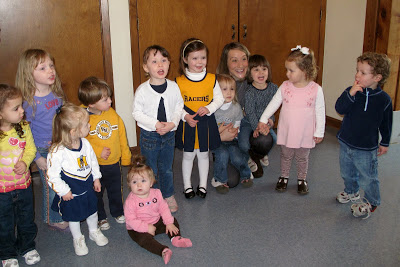 They listened to a story about a horse and made a cheer banner, which Cate is holding while wearing a new dress I couldn’t resist. Cate wasn’t at the storytime but the coordinator who is a friend of mine knew she’d want in on the Racer crafting action. 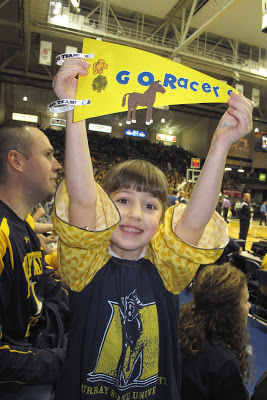 And she’s seriously Racer proud. Cate brought her craft to the game last night. And earlier this week while in Kroger’s frozen food section, she said, “We are in row 11, like Donte Poole‘s number.”

All of this Racer love and talk did accomplish one other thing last night: Cate seemed over her fear of costumed mascots. 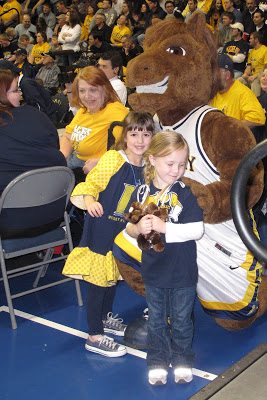 She volunteered to pose with Dunker. I am sorry the girl we do not know had to share Dunker, but there was no stopping my excited girl who was ready to leap over her fear … and into Dunker’s arms. Perhaps that other girl got a solo picture after Cate ran back to our seats to hug me. That’s simple joy if I’ve ever witnessed such.