{Originally published in 2009. Updated for today.} 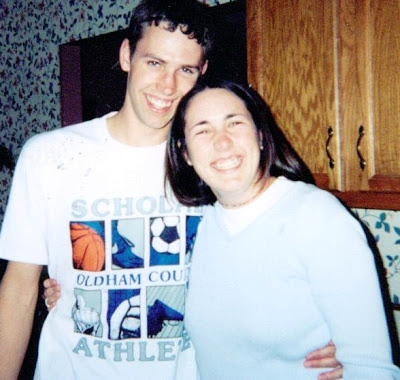 We must have liked each other: I brought him
to La Grange; he stole my OCHS shirt.

Picking up where I left off …

I actually ran into Greg on campus the Friday before our first date. I walked with him up to the audio/video studio in the Fine Arts building and ended up having lunch with him in the campus cafeteria.

Then the next afternoon — Feb. 14, 1998 — he pulled his 1978 International Scout {like this one, but without the stripes …} in front of my door. I met him out there for our date. We went to Baskin-Robbins, where he ordered a sundae because it was the special. I have no idea what I ordered. But we took our desserts to the park. You never know with Kentucky weather, so it must not have been too cold out.

We parted ways afterward, but our day ended up not being over. He called from the student center, which was across the street from my dorm, because he needed to borrow a CD player. Turns out I had one, and was willing to bring it over. His family — his entire family, which if you know anything about Taylors, involves many, many people! — rented one of the ballrooms there for his grandparents’ 50th wedding anniversary.

Conveniently, Greg had to return the CD player after the party. We ended up talking … all night. It’s the only time in my whole life I’ve stayed up all night. I think I got a couple hours sleep early that morning, which was good because my mom drove down from Louisville that Sunday to spend a few hours with me.

I told her I met a boy that I really liked. She sort of shrugged her shoulders like she thought I was just making friends. Well, I was, but turns out this friend really stuck around.