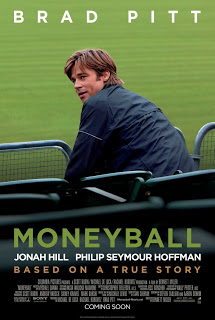 My two favorite college basketball teams are having tremendous seasons. Murray State is setting all kinds of win streaks, attracting national publicity, and selling out the arena more than once. That happens when your team is 20-0. Meanwhile, Kentucky returned to the top of the polls this week. The Wildcats have lost only once, for anyone keeping track. Thanks, Indiana, really.

So despite the excitement that has been college basketball season at our house, Greg and I cheated on basketball with a baseball movie last night.
St. Louis Cardinal catchers and pitchers do report in 23 days. But back the movie …

“Moneyball” starts at the end of 2001 season when the A’s lose to the Yankees in the playoffs, which leads them to the World Series. The Yankees go on to lose to the Diamondbacks. And that’s when I really became a baseball fan.

I started paying attention in 1998 when Mark McGwire and Sammy Sosa were hitting lots of homeruns. Greg, a long-time St. Louis Cardinals fan, had been working on me to become a Redbirds fan anyway.

But it was the 2001 World Series that really did it for me. Small market team beats the Yankees. It’s a story worth holding on to.I knew I was hooked when I realized I’d watched a seven-game World Series that involved no team I had any previous rooting interest invested.
And then “Moneyball” {that’s what I set out to talk about} continues to the 2002 season. Rebuilding. Cleaning house. Finger-pointing. And then The Streak.
During the real-life streak, Greg and I watched an A’s game live. We were on out honeymoon, partially in San Francisco. We couldn’t get tickets to see the Giants; I think they were out of town while we were in town. So we went across the bay to a football stadium where the A’s also play. It was August, and the streak was just beginning.
I don’t think Brad Pitt was there, though.
“Moneyball” was good. It was a slow-paced movie, but that’s appropriate. It’s a baseball movie, folks. Part of the beauty of baseball is the steadiness with which the story unfolds. Much can happen in 162 games. Just ask the World Series St. Louis Cardinals. The movie is a behind-the-scenes look into the business of baseball.

And it’s worth two hours away from college basketball.

Billy Beane: It’s hard not to be romantic about baseball. This kind of thing, it’s fun for the fans. It sells tickets and hot dogs. Doesn’t mean anything.
Peter Brand: Billy, we just won twenty games in a row.
Billy: And what’s the point?
Peter: We just got the record.
Billy: Man, I’ve been doing this for … listen, man. I’ve been in this game a long time. I’m not in it for a record, I’ll tell you that. I’m not in it for a ring. That’s when people get hurt. If we don’t win the last game of the Series, they’ll dismiss us.
Peter: Billy…
Billy: I know these guys. I know the way they think, and they will erase us. And everything we’ve done here, none of it’ll matter. Any other team wins the World Series, good for them. They’re drinking champagne, they get a ring. But if we win, on our budget, with this team … we’ll have changed the game. And that’s what I want. I want it to mean something.

Baseball season is something special, even though the real Billy Beane is still waiting for a ring. I’d be OK with him getting it one day.

But, first, back to college basketball. Our Racers will try to make it 21-0 in front of a sold-out hometown crowd Saturday against Eastern Illinois. Tip off is at 7 p.m. central for anyone who can watch on ESPN3. Kentucky plays at LSU earlier in the afternoon.