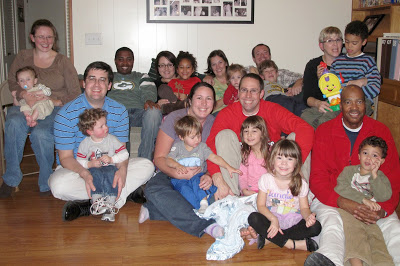 We started attending Christian Community Church in January 2004, about five months after we moved back to Murray. We’d only been going there a few weeks when I was diagnosed with diabetes. The church that barely knew me sent flowers and a couple visitors.

That spoke more than any sermon to me about community.

Like the name says, our congregation values community — the group of people we choose to surround ourselves with, the place we live, the people we know who live in other towns, the world in general. And we believe that God changes people, including ourselves, through relationships.

That’s what I love about our church. There are other things that I like: It’s small. It’s non-denominational. There are lots of kids my kids’ ages. It’s connected the campus ministry with which I was involved in college. The foundation of the congregation is small groups {called cell groups} that meet during the week. But all of those things go back to community.

In the spring of 2004, only months after we started going to CCC, a large small group broke into two groups. We initially split based on who could meet in homes because they didn’t have pet allergies and who would continue meeting at the church building. Various factors led a couple people to swap places, and the group that became our current small group was formed.

I’ve shared this before, but it’s worth repeating:

When the Scripture talks about church, it means community. The little fellowships of the heart that are outposts of the kingdom. A shared life. They worship together, eat together, pray for one another, go on quests together. They hang out together, in each other’s homes. … I love this description of the early church: “All the believers were on in heart.” (Acts. 4:32). There is a camaraderie being expressed there … . It means they all love the same thing, they all want the same thing, and they are bonded together to find it come hell or high water. And hell and high water will come, friends, and this will be the test of whether or not your band will make it: If you are one in heart. … Going to church with hundreds of other people to sit and hear a sermon doesn’t ask much of you. It certainly will never expose you. That’s why most folks prefer it. Because community will. It will reveal where you have yet to become holy. It will bring you close and you will be seen and you will be known and therein lies the power and therein lies the danger. … Seriously, now, how often have you seen this sort of intimate community work? It is rare. Because it is hard, and it is fiercely opposed. The Enemy hates this sort of thing; he knows how powerful it can be, for God and his kingdom. For our hearts. … We have settled for safety in numbers — a comfortable, anonymous distance. An Army that keeps meeting for briefings, but never breaks into platoons and goes to war. Living in community is like camping together. For a month. In the desert. Without tents. All your stuff is scattered out there for everyone to see. C’mon — anybody can look captured for Christ an hour a week, from a distance, in the Sunday best. But your life is open to those you live in community with. … A true community is something you will have to fight for. You’ll have to fight to get one, and you’ll have to fight to keep it afloat. … Suddenly all those “one another’s” in Scripture make sense. Love one another. Bear one another’s burdens. Forgive one another. … But be careful about what you are looking for from community. Community is no substitute for God. … We first go to God, alone, so that we have something to bring back to the community. … God is calling together little communities of the heart, to fight for one another and for the hearts of those who have not yet been set free.

–John Eldredge in “Waking the Dead”

More than seven years ago, there were seven adults and one baby, I believe. We grew in numbers because other people joined and then those families multiplied as more babies were born. Families moved away while others joined. And then more babies were born, again. Last spring, when there were as many kids as adults {I believe it peaked at 14 each} our cell group split into two. It was a peaceful situation that was beneficial for everyone.

Recently, I was feeling as if it was time for another change. When I talked to Greg about it, he agreed. After thinking and praying about it, we decided to step back as cell group leaders {which happened sort of by default along the way!} and join a group that isn’t full of people our age with small kids.

Don’t misunderstand me, a couple of the families in our cell group {pictured above} are some of my dearest friends. They’re the people I call {or perhaps text} when I have news of any kind. They’re the people we hang out with and eat meals with and schedule playdates with. And I hope to spend time with the other families too. We’re all in this parenthood thing together, swapping stories and tips and encouragement. Our kids are in Sunday school classes together. And we sit near each other on Sunday mornings.

And they will be.

But Greg and I believe God has something else to do. With our family. And with these families we love. So we’re joining other families from our church in other groups. We’re trusting God that he’s leading us to where we need to be as our community grows.