It’s no secret we like sports around here. We even have a family room dedicated to our favorite teams. Baseball is a favorite, right up there with college basketball.

We’re Cardinals fans. From the comforts of our couch, we watched many of the 162 regular-season games that were alright. We even had really good seats for one of those. 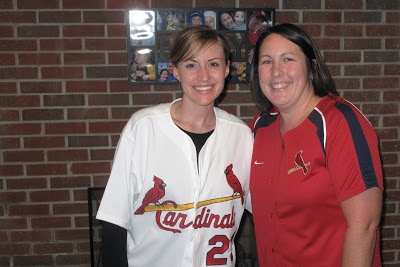 I met Kristen while preparing for Marketplace and during the event we realized our husbands play basketball together. And we’re all Cardinals fans. In fact, she went to high school with David Freese. Yep, MVP David Freese. We invited them over to watch some of the World Series — Game 3 {you know, when Albert Pujols hit three homeruns …} and then Game 7.

The thing about the Cardinals: They kept finding ways to win. Albert Pujols was intentionally walked so many times. But David Freese stepped up. And so did Lance Berkman. And Allen Craig. And Yadier Molina threw people out. And the Cardinals were the team that had heart and character to carry them to the end. All the way to the end. 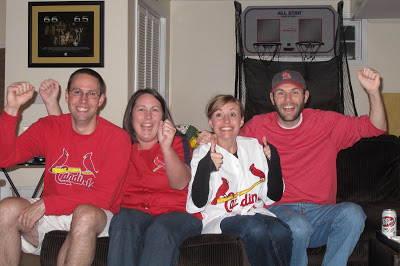 The Cardinals are World Champions now. After a Game 6 that came down to one strike three times and took our breath many more times, the Cardinals finished business in front of their hometown crowd in Game 7.