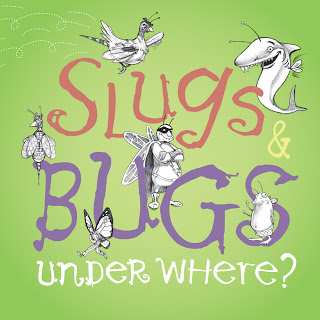 I’ve been craving Mexican food, especially that delicious white cheese dip, more than usual, thanks to Randall Goodgame and Andrew Peterson. Yep, they’re musicians who make me crave a particular food. Perhaps I should explain. My 4-year-old daughter asks the same thing nearly every time we get in the mini van these days: “Can we listen to ‘Cheese Dip?'”

I usually say yes and proceed to bring up the “Slugs & Bugs Under Where?” playlist on my iPhone.

And, technically, the song isn’t called “Cheese Dip.” Cate knows it’s called “Mexican Rhapsody,” but she’s just quoting her favorite line in the fun song, which happens to be the fifth track on what’s clearly going to be another of my family’s favorite albums.

Let me introduce you to Randall Goodgame and Andrew Peterson. They’re singers/songerwriters who can make me, my husband and my kids laugh, celebrate who God is and what he’s doing in our family, and give us fun jingles to sing as we go about our days — sometimes all at the same time. We were blessed by meeting Goodgame and his recent Slugs & Bugs Live show and now we have new tunes to bless us.

Sure, “Mexican Rhapsody” is catchy and fun. And we really do like cheese dip and bowls that you can eat. But what I personally love on “Slugs & Bugs Under Where?” is “I’m Adopted.” It’s a song that speaks about being adopted into a family and being adopted into God’s kingdom. I became a mom because of adoption. We expanded our family, thanks to adoption a second time. And we’re promised eternal life because of an even greater adoption story. I’m grateful that somebody took some of what I believe about adoption and made a song that my family can treasure.

And then there’s “God Makes Messy Thing Beautiful.” What a testament to our creator, who is even more into the details than I try to be. I hope it’s a message my daughter embraces too.

Speaking of my daughter, her other favorites are “Lightning Bug” and “Pajama Drama.” She doesn’t even know how funny it is that our current president’s name rhymes with pajama. We all laugh when we listen to “Under Where?” and it’s already created an opportunity for me to teach my girl about homophones, although I didn’t describe them with that official term. “Tell it to Jesus” is a simple song about an important concept that I hope never leaves me kids’ hearts.

Like their first album, Randall Goodgame and Andrew Peterson {and their musical friends who add so much joy through their instruments} make children’s music work. It’s fun. It’s meaningful. It’s not annoying. And all four of us — from ages 33 to 2 — in my house agree it’s worth listening to, over and over again. And again.