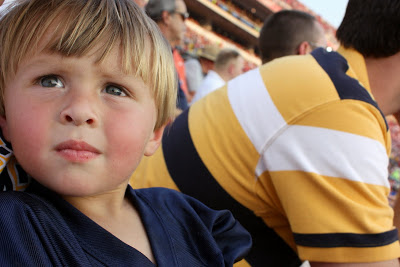 Thanks to the Courtney for the above photo.

On today, which is Day 22 of my summer cold, I can finally say I feel better. I feel closer to normal than I have in three weeks. My head doesn’t feel like it’s going to explode, my blood sugar isn’t fluctuating to the extremes, the fluid in my ear doesn’t feel like it’s going to spill out of my head, my nose isn’t raw from blowing it every 6 seconds, coughs aren’t interrupting my sleep, my energy level is much improved and my throat isn’t itchy.

Being sick when you’re a mom is rough. I didn’t do as much as I usually do, but diapers still had to be changed, food still had to be bought and sometimes prepared, questions still have to be answered and clothes needed to be washed and dried and eventually put away. And, even as much as I love summer, the 100-degree temperatures probably didn’t help.

Plus laying on the couch for days at a time isn’t really an option with a 21-month-old boy who is all boy. I know, he looks all innocent watching the Murray State football game in that picture above, but having him sit like that is rare. He likes to be on the move. He likes to do whatever his big sister is doing. He is loud and funny and constantly into something.

I tried just doing things and going places in an attempt to forget how bad I felt. Some days that worked, at least temporarily, until I crashed on the couch later. We even had a couple out-of-town trips planned that I didn’t want to miss.

Summer colds are miserable. I went to the doctor twice, coming home with medicine only the second time. I learned that a steroid pack for a Type 1 diabetic is complicated. I’d do a chore, and then have to rest, and I longed for the day to end so I could just lay down, even though sleeping was frustrating because the coughs and congested interfered with my dreaming sweetly.

I kept hoping the next day would be better.

And today, finally, I can say I’m better.

I’m still coughing and have a runny nose, but that’s nothing compared to the past three weeks. Trust me, this is relief. I’m so happy to be here. And I’m happy the fall weather joined me.