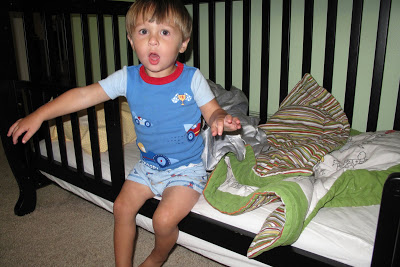 Ben’s crib has been converted to a big boy toddler bed! On the day he turned 21 months old, we decided to go ahead with the move. He hadn’t climbed out of his crib yet, but Greg and I have been anticipating our vacation. We leave a month from today to spend nine nights in Ellsworth, Maine and Boston. We’re already going to be flying with two small kids, a car seat, a stroller and all our luggage, so we thought we’d be better off if we could leave the pack-and-play at home.

But the first night was a success! 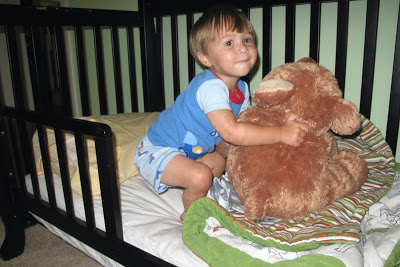 There was much excitement! 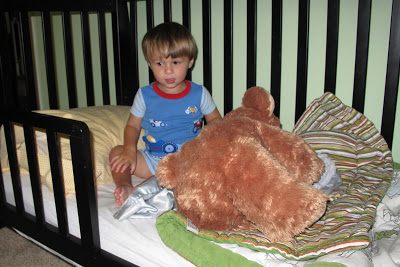 And then he settled in. 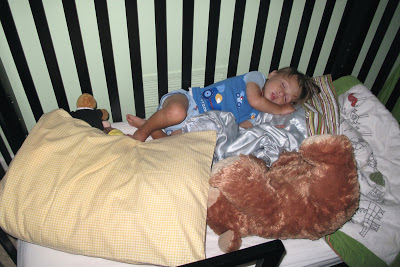 Ben is the type of kid who goes and goes and goes until it’s time for bed. There’s not much winding down time for him. But once he’s there, he likes his bed and sleeps well. But for some reason, he cried for 20 minutes after Greg sang and prayed with him. Tears don’t usually accompany bedtime around here. I’m not sure if he recognized his bed being different, if he missed his bumper pad that he often snuggled close to, or if there was something unrelated on his little mind. Even in the crying, he didn’t get out of his bed.

Well, not until 7:05 this morning when I heard him playing with the door stop spring that makes the fun vibrating sound when touched. That’s much greater success than I anticipated from my boy who likes to be on the move and into everything.

Yes, part me of me thinks it’s crazy he’s approaching 2 years old. Then I think about when we switched Cate to a toddler bed, and I realize time certainly flies in this season of motherhood. Cate was almost 23 months and we were anticipating trips to Texas and New Zealand a few months later. We obviously knew less about what we were getting into and allowed for much more time to train her to sleep in a bed with more freedom.

One night of freedom for Ben was a success. Now I can only hope this is a sign of what’s the come.