We went to Holiday World yesterday. It’s such a great amusement park for young kids. You should take your kids. And go on a weekday if you can. Last year we went on a Saturday. This year’s experience was much smoother, probably both because of our weekday trip and not having an 8-month-old boy with us.

That baby is now 19 months old. And he got his first taste of rides and even cried when he wasn’t tall enough to ride the flying sleighs or go down the smallest slide at Splashin’ Safari. Ben had been on carousels before, but nothing more. For a boy with who loves to be on the move and has no fear, an amusement park seemed to be a good fit, even now, before he’s 36 inches tall. 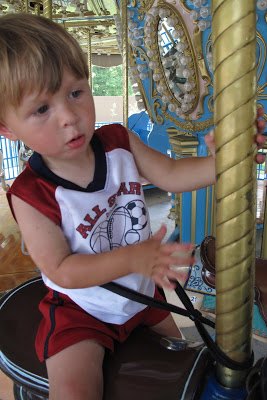 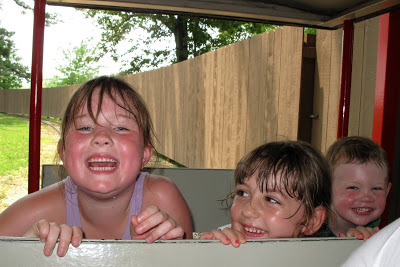 We met my parents, sister-in-law, niece and nephew there. Oh, and it was hot. Like the hottest day we’ve had so far this summer. 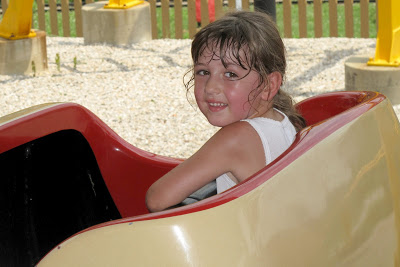 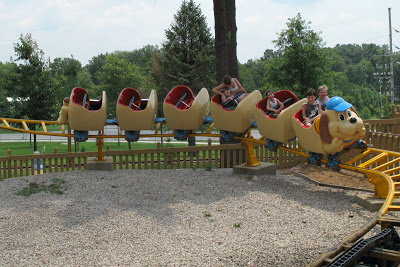 Cate rode this kid roller coaster four times. She would have gone again and probably again, but the rest of us were ready for the water park. And, really, I’m glad she liked it. I’m a roller coaster girl myself, so I’m working toward raising a roller coaster family. {This was actually Cate’s second roller coaster. Her first was last fall in Branson.} And it reminded me how much time flies because two years ago she was an inch or so too short for some county fair rides.

We got situated near the kid slides at the water park and soon realized Ben was too short to go down the smallest slide that wasn’t even as tall or steep as some of the slides he goes down at the park. Try explaining to an adventurous 19-month-old that he can’t go down the slide.

So we moved on to one of the two lazy rivers. Ben was restless the first trip around. Remember, he likes to move and has no fear? Loop No. 2 was better … until it started raining. But we stayed in. I mean, a little rain was some relief from the heat. And then during our third round, the rain was cold and pelting us.

And once we got out, the storms really came. They shut down the water slides and rides. And we gathered our soaked stuff that had been sitting out while we were being attacked by rain drops and tried to stay warm and dry. The dry part was a failure. I ended up having to buy some Holidog beach towels. My kids had dry clothes in the car, but I didn’t, so I bought a T-shirt to wear over my swim suit and then put my soaked shorts back on just long enough to eat dinner.

Holiday World is in Santa Claus, Indiana. We wondered what a town that is happy to host Santa all year around — even on the hottest day of the summer! — is like in December when people are actually in the mood for Christmas. Laine and I were unsure of the Christmas music playing while the kids were riding rides in Rudolph’s Reindeer Ranch. But the kids loved the snowman outside one of the few restaurants near Holiday World. 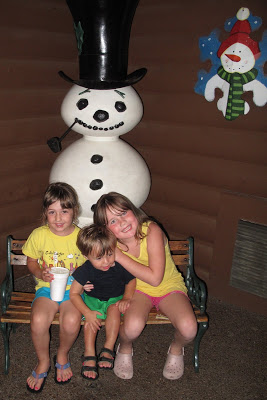 Perhaps they felt a bit of relief from the muggy July weather while posing with the snowman. But even with the heat and then the crazy rain, it was a fun day.