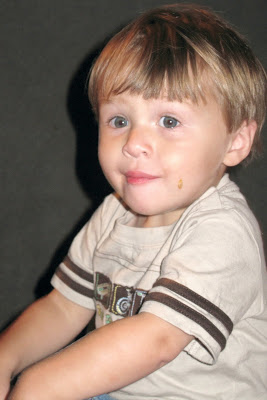 We took Ben to his first theater movie on what was a rainy Saturday this past weekend. “Cars 2” will go down as his first theater movie, even though technically he sat with me through “Cloudy with a Chance of Meatballs” last summer when it was re-airing as a cheap children’s special. I’m pretty sure he slept through much of that one.

He watched the first part of “Cars” well. And ate lots of popcorn. Yes, that’s a lingering piece of popcorn on his cheek in the picture. Then he got restless, so I gave him Skittles one at a time and took him out for a diaper change. His restlessness wasn’t bad behavior, though. He just wanted to move around more than I wanted him to. He just wanted to be one of the big kids we were with. He was done with watching the cars on the big screen; he probably wanted to drive a car in a race instead.

Even though two hours {Technically, the movie was 1 hour 53 minutes long, plus previews and a random “Toy Story” short …} in a theater isn’t the optimal place for a 19-month-old boy who likes to be on the move, it was a fun afternoon with friends in the most crowded movie theater I’ve experienced in our small town. I consider it a success, and I’ll do it again. Of course, I’ll wait for another movie that makes me want to venture into the darkness with two small kids.