I’ve lost count of how many times I’ve heard this question in the last few days. Cate has her reasons, of course, for asking …

“We learned about Z, and now it’s summer.”

Or “We don’t go to school when it’s summer.”

And, so, based on my 4-year-old girl’s definition, this week is summer. It’s her first weekend without school. And she studied the whole alphabet, so it must be summer.

It sure felt like summer last week with temperatures around 90. But it’s Kentucky, so no weather lasts too long. It’s cooled off and a spring week of weather seems to be in the forecast.

But, really, it’s just too complicated to explain to Cate that even though she’s taking a break from school, the calendar still says it’s spring. It’s much like trying to tell her why she had to wear leggings under her long-sleeved dress on a Sunday in May when the temperature wasn’t going to reach 60, just days after she got sunburned wearing a tank top while picking strawberries. 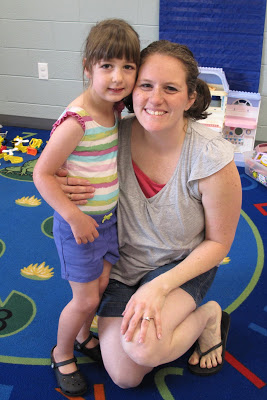 We ran into Mrs. Amber on Saturday, which was not even a week after Cate’s last class with her. Even so, Cate was so excited. I’m not sure Cate realized Mrs. Amber existed outside the preschool walls. They chatted because, of course, Cate had stories to tell her.

I just watched and listened, thankful that Cate’s first teacher was someone who helped channel my daughter’s bossy, first-child ways into early signs of leadership, who held her hand literally while running through a sprinkler during the year-end water party and figuratively while Cate learned to raise her hand when she had something to say, who taught the kids more about Jesus, and who loved on my son when we had to leave even though he wanted to stay. 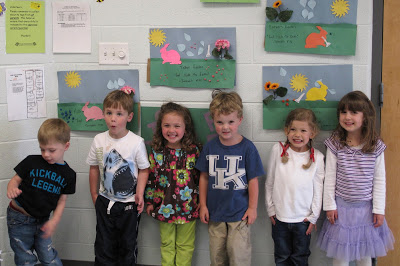 Cate decorated a wooden picture from with foam letters to spell “I love my friends” and brought home a class picture, much like the one above. But my favorite part is Mrs. Amber’s note to her on the back …

I’ll cherish so many things from this year, especially the way Cate made her own friends, memorized Bible verses, learned to write her name and the rest of the alphabet, enjoyed knowing the next morning was a school day when we tucked her in at night.

Now it’s summer for many days to come. Starting now.