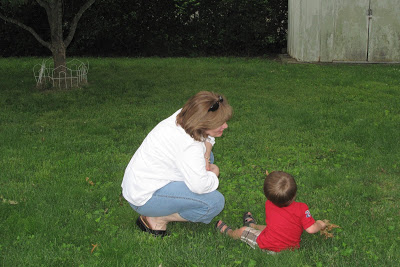 … often has something to say. I have 27 words on the list I’m keeping of words he says. He notices dogs and cats, and usually meows, regardless of which animal he actually sees. Instead of saying “please” when asking for something, usually his “cup,” he says, “thank you.” It’s sweet and is so much better than any screaming tactic. 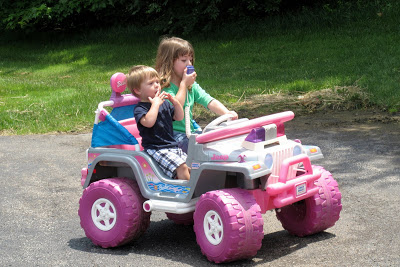 … imitates anything Cate is doing. Here he’s trying to talk on his invisible CB radio while Cate talks on hers while they drive in front of Grandmom’s house.

… walks like a pro, and even runs. At 15 months, he was barely walking.

… has 16 teeth, meaning he’s only missing his 2-year-old molars.

… still drinks soy milk. And water and juice. The boy likes his cup. He’s also recently discovered, thanks to his sister’s seemingly cooler drinks, Sprite isn’t so bad after the initial surprise of the carbonation.

… wants to have a fork near at meal time, even if he doesn’t actually eat with it.

… likes to watch Diego, which he refers to as “movie,” although it sounds more like “poopy.” He’ll move his shoulders to the theme music and seems to like all the animals. Plus, he likes sitting on the couch next to his sister. Yes, that’s about the only sitting he does, other than eating, and, yes, it’s usually short-lived.

_______
I always like looking back at what Cate was doing at the same age. In some ways, her being 18 months old seems like a lifetime ago. And in other ways, I think it was yesterday. For a size comparison, Cate weighed almost 3 pounds more {25 lbs. 6 oz.} and was just about the same height {32 1/2 inches}.