I realized I never wrote about my weekend away. And it’s worth writing about.

Mom and I stopped for a Coke Zero at a gas station in Cadiz before we got on the interstate and discovered a great gift shop. Yes, attached to the gas station. That was on our way to Nashville to meet Laine and some of her family members for her bachelorette party. Laine is marrying my brother in a couple weeks, and it’s especially fun to celebrate because we’ve know her so long and she’s really already part of our family. 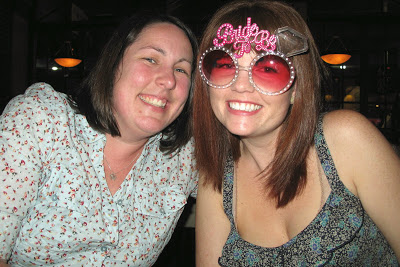 I discovered the deliciousness of Demo’s on Friday night. Then on Saturday, Mom and I met Greg at Ted’s Montana Grill for lunch. From there, Greg and I began our overnight date, which included watching “Scream 4,” shopping at Target, eating some more, and then to the Matt Nathanson and Sugarland concert. Well, Little Big Town was there too, but I didn’t come to see them.

I wished Matt Nathanson played longer; four songs didn’t cut it. Although the four songs were good — two new ones, “Come On Get Higher,” and then a fun cover of Journey’s “Don’t Stop Believin’.” I just wanted more.

Sugarland was awesome live. Jennifer Nettles can sing. And my favorite part was when Matt Nathanson came back out to sing “Run” — a song that’ll be on his new album this summer — with her. Man, they’re good together. Sugarland’s closing cover of Madonna’s “Like a Prayer” was entertaining, but there’s just a lot going on whenever Little Big Town is on the stage.

Also included in my weekend was some sleeping in and then a perfect ending meal at Blackhorse Pub & Brewery in Clarksville, Tenn., on our way home. Even after such a fun weekend, I was so glad to be back home because, really, Dorothy was right. There’s no place like it.