We started to wonder if the Final Four tickets we planned to buy were going to come in the mail. Our mail doesn’t typically come until at least 4:30 p.m. each afternoon, so Greg went by the Post Office just after it opened and explained we are supposed to leave this evening and had a little concern about our tickets. Grandparents were supposed to come into town to watch my kids and Courtney’s kids so we — along with our husbands, of course — could go to Houston. We needed to make sure we had tickets.

The Post Office supervisor agreed to call our letter carrier, Robin, to see if she had an envelope from Owensboro. Then the supervisor called Greg back to tell him that she was near the courthouse downtown and he could meet her there.

So he waited by her mail truck and watched for her.

But he watched the time too because he was supposed to go to an auction at 10 a.m. So he called and asked if I could come wait for her. I did.

Only the lady who walked up to the mail truck wasn’t the Robin who usually delivered our mail. Turns out her name isn’t Robin, but she does deliver some of Greg’s work mail. Regardless, I still wanted to find Robin. Conveniently, this mail lady happened to have Robin’s cell number on a scrap piece of paper in her bag. She called Robin.

“Robin, I have a lady here who needs to talk to you about an envelope with tickets in it. Can you talk to her?”

Apparently Robin said yes because the other mail lady handed me her pink cell phone.

“Hi. This is Kristin Taylor from Sharpe St. I’m wanting to get an envelope I think you have. It has Final Four tickets in it and we’re supposed to leave tonight.”

She was gracious and told me where I could meet her. 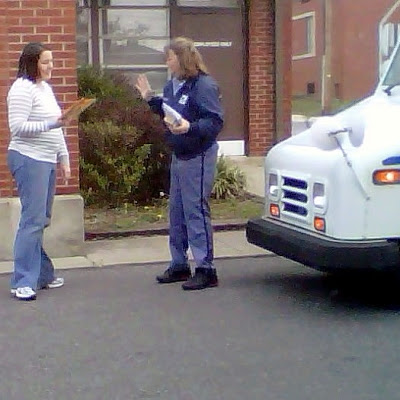 She apologized for not having the rest of mail readily available. “Oh, that’s fine, this is the only mail I need today.”

And then we just kept talking … 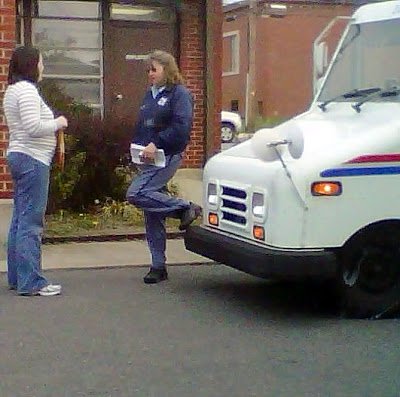 … about the Final Four and about vicious dogs along her postal route.

And Holly took pictures of my small-town adventure. Now, on to the big city for some basketball games.