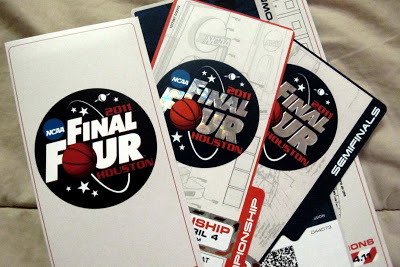 Four of us went without our four kids to the Final Four.

We were gone for 52 hours this weekend, 11 of which I spent awake in Houston, where the Kentucky Wildcats made an improbable appearance in the Final Four and fell slightly short. The Cats played hard, but they played scared. They missed free throws and other wide-open shots.

The other 41 hours were spent driving from Murray, Ky., to Little Rock, Ark., on Friday night and then continuing our road trip to Houston on Saturday; sleeping in Houston after the Final Four games and eventually getting out of the parking lot; and driving the 743 miles back home. 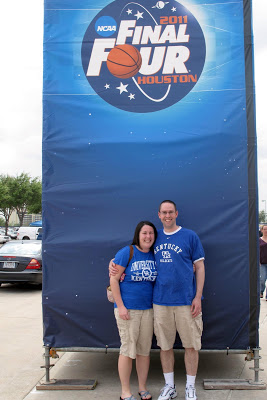 But we had a good time. It was an adventure from the beginning.

And then decided we didn’t want to wait around for UConn to win a championship. Nothing personal, I’m just a Wildcats fan at heart who isn’t especially fond of the Big East. Plus, I’m loving the mid-major underdog. So … go Bulldogs! 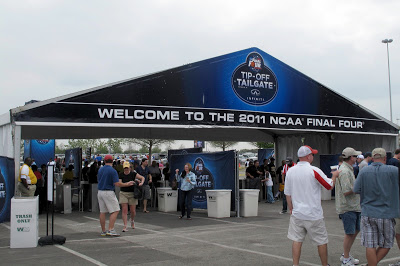 And here’s a view from our seats … 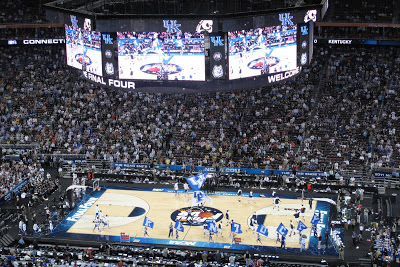 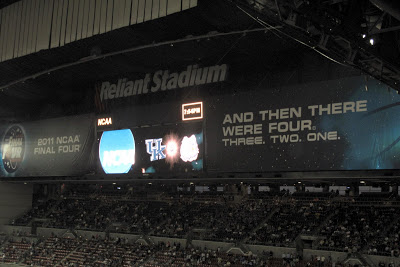 I like the blastoff reference within the Final Four slogan. “And then there were four. Three. Two. One.” So in honor of that, here are some more numbers from our Final Four trip …

* We traveled more than 1,486 miles from our driveway to Reliant Stadium with some hotel, food and gas stops between.
* I saw Just 1 Tennessee fan wearing orange.
* Two Ohio State fans who live in Houston sat next to us and cheered for UConn and VCU.
* 75,421 people nearly filled Reliant Stadium.
* Three of the four of us cheered for Butler.
* Zero Kit-Kats, Starbursts, Twizzlers, Reese’s Cups or any other candy were consumed by me, thanks to my candy/desserts fast. Yes, I usually want junk on road trips.

I’d never spent more than one night at a time away from my almost 4-year-old Cate, and I’d only done that three times. In Ben’s 16 months of life, I’ve only been away one night. It’s not that I think I’m the only one who can take care of them; I just like being with them. Sure, I’m worn out at the end of many days, but they go to bed before me, and then Greg and I hang out. We blessed to have dates on our couch many nights.

But I was excited to go with my husband and our friends Andy and Courtney to this once-in-a-lifetime opportunity. Sure, we’d rather the Cats have won and found ways to kill time before the National Championship tonight. But we were excited to be among the largest crowd to ever watch a Final Four game. And much of that crowd was blue.

As I was packing on Friday, I told Cate, “I am going to miss you a whole lot when we’re gone.” She gave me a wad of Kleenex and said, “They are for you to blow your nose in the hotel.” I didn’t cry. She didn’t cry. But I like a girl who likes to be prepared. And then she said, “I’m going to miss you too, but it’s going to make me really happy to have Grandmom here.”

Of course, Cate kept everybody in line while we were gone and accessed everything Grandmom and Angela [Grandmom’s friend] did. She told them their bedtime prayers were too short and they didn’t have lunch at “my mom’s favorite picnic table” at the park. For the record, I don’t have a favorite picnic table, but we do usually eat at one particular pavilion.

Usually is big for her. And, really, it’s big for me.

Yet I’m thankful I got to do something that I don’t usually get to do.

_______
You can see more photos from Reliant Stadium — where blue was a popular color — in my Facebook album.