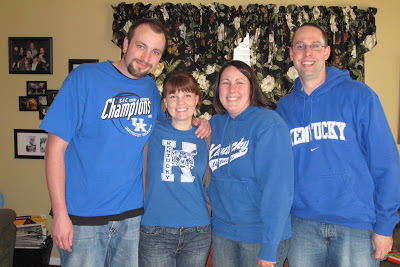 Watching Sunday’s UK game with my family was fun. Especially because the Cats beat UNC, earning a trip to the NCAA’s Final Four. Really, I left Louisville wishing my brother, Kevin, and his fiancee, Laine, who is really already part of our family, could watch more basketball with us.

But the after story is pretty great too.

While driving down I-65 South from Louisville heading toward Elizabethtown, making our way toward home, Greg got a text from his friend talking about the weather in Houston this time of the year and how he’d let him know more next week. Interpretation: His friend was going to cheer for the Wildcats at the Final Four.

“Wouldn’t it be fun to be able to go to the Final Four?” Greg asked. I’m sure he thought he was just thinking his rhetorical questions aloud. But I had something to say, of course.

“You know, Mom’s friend Angela’s son is selling his tickets?” I said, thinking he’d heard previous conversations about this Louisville fan rooting for the Wildcats because he thought it would make his tickets easier to sell. Thinking back, most of the conversations about the tickets happened at the bridal shower for my soon-to-be sister-in-law, officially.

So he asked some questions for which I didn’t really have answers. You know, the basics when considering planning an impromptu trip to Texas: How much. How many. Which games. After a couple phone calls to my mom and another phone call from my mom to her friend, we got the answers.

Four tickets. To the Final Four.

And we all four decided we’d go. Without our two kids or their two kids.

Courtney found a hotel. I made arrangements to get the tickets. We coordinated schedules. And Greg and I kept asking each other if we were really planning a trip to the Final Four. Indeed we were. In fact, we had the trip planned well before we got back to Murray, 226 miles from where we’d just watched an exciting Wildcat victory with my family.

My only hesitation was leaving my kids for four nights. I’ve only ever spent three nights away from Cate in her almost four years of life. Two were for one-night overnight dates with Greg and the other was the day Ben was born. Crazy part is, I have a weekend away planned for mid-April, so with these two trips I’ll be gone overnight twice as much as I ever have before.

Yet attending the Final Four when Kentucky is there is on Greg’s list of dreams. He said on the drive home that he never really thought it was something he’d get to do. So I’m glad we get to do it, together, and with dear friends. My kids with be in the care of their more-than-capable grandmas over the course of the long weekend. And all the logistics just lined up, like it’s meant to be.

And, hopefully, for the Cats.