But he prefers crawling. Quickly. And, trust me, crawling doesn’t slow him down. In fact, I think he realizes walking will slow him down, at least briefly while he masters the new mode of transportation. 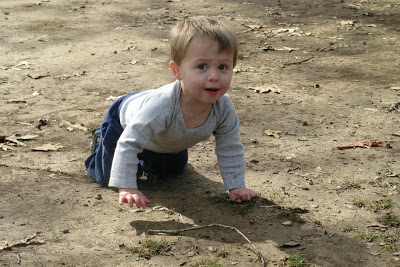 Really, though, who needs to walk when you can just crawl? Ben certainly doesn’t care that he has to put his hands in dirt. He likes to be on the move and he’s quick messy, regardless of what he’s doing.

There’s no slowing him down, I’m telling you. And that’s probably why he has hovered around the same weight for a few months, despite his love of eating. He was 21 lbs. 4 oz. (25th percentile) at his 15-month check-up appointment earlier this week after being 21 lbs. 1 oz. when he was 10 months. And for the blog record, he’s 32 inches tall, which puts him in the 75th percentile.

I was looking up details of Cate being 15 months old, and it’s interesting to see their similarities and their differences.

He doesn’t say quite as many words, but he’s certainly not quiet either. He uses “uh-oh” when anything is on the floor, says “up” when he wants up, says “nigh-night” for anything associated with sleep, he says “hi” to nearly every we ever pass, can say “bye” but is rather stubborn about it, uses “thank you” for both it’s actual meaning as well as for “please,” and says “mama” more than “dada.” He has his own versions of Cate and shoes. And I think he’s trying to say Norah.

In other 15-month news, Ben likes to go to bed at 7 p.m., and sometimes before, and generally sleeps 12 hours. He’s been taking one nap most days but a couple mornings a week he needs that extra nap. He likes to climb in chairs, has mastered going up and down the stairs quickly, and knows to say “hi” when he puts a phone to his ear. Unfortunately, he also likes to throw fits when he doesn’t get his way, but I’m guessing he’ll learn sooner rather than later that such a strategy doesn’t work on this momma.

He’s generally happiest — and boy does he have a great smile — when he’s on the move. 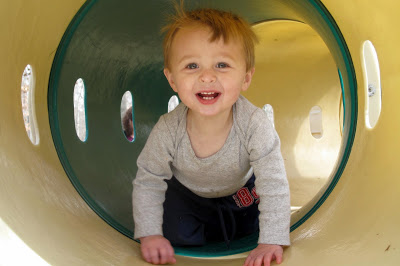 When he’s not crawling, he very well could be climbing, like up these playground stairs. And, yes, he prefers going down the slide head first on his belly. 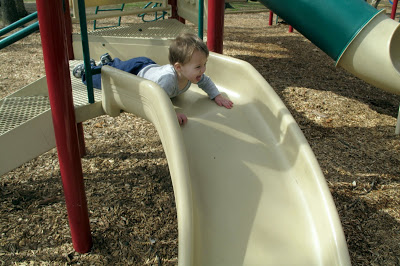 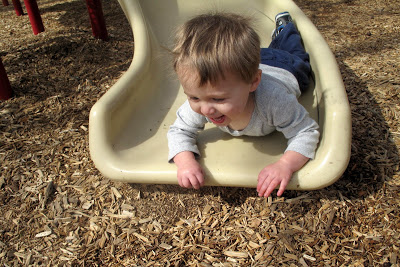 Then there’s Cate, who comes down the slide after Ben and says, “Momma, take a picture of me?” 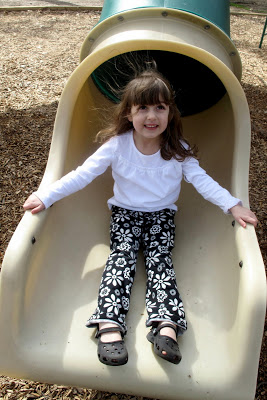 So I took picture, and then she was quickly off to pick up some sticks, which make great tools for the digging in the same dirt through which her brother prefers to crawl.