Our road trip to Clarksville, Tenn., Saturday afternoon reminded me of one day at the lake with out-of-town friends last summer when nothing went as I expected. Obviously, I needed yet another lesson in letting go …

First, the Yukon we borrowed from my mother-in-law was tighter than expected, mostly because the three booster seats for Cate and her friends Emma and Noah couldn’t all sit in the very back together. So Courtney and I ended up in the back, with Ben and his car seat between us. It was miserable, just more complicated that it should have been and unloading at each stop wasn’t smooth.

One of my all-time favorite restaurants had a two-hour wait for our party of 11. The Goodriches stayed there because they were pressed for time, like we were. The rest of us tried Olive Garden, which had an hour wait. We ended up at Rafferty’s, which is a family favorite, but we could sit with the Frenches because we didn’t want to miss the tip-off of the Murray State at Austin Peay basketball game.

Then when we got to Austin Peay, we had to wait in line for 20 minutes for general admission tickets. We missed the live tip-off, but we got to see the opening minutes on the TV screen in the lobby.

When we went to our assigned seats, we were a blue-and-gold patch in a sea of red. The predominately gold sections around the corner to our left were apparently sold out. We spotted seven available seats in the section next to the gold sections and saw more Racer fans there. So we moved. I think the Governors fans around us were pleased.

I changed Ben’s diaper on my lap because I knew from a previous experience with my then-small daughter that the bathroom didn’t have a changing table or counter. My lap was better than the bathroom floor.

Cate didn’t fall asleep until we were 15 minutes from home, and it was 10:55 p.m. Ben procrastinated about going to sleep in the vehicle, too, but he didn’t push it quite as long as his sister.

I bought three boxes of diapers and two packages of wipes at Target, and I used two coupons [one store and one manufacturer] on each item, plus got a $5 gift card back for buying the diapers I was already going to buy.

Rafferty’s isn’t a bad restaurant on which to settle. And Sarah brought me home some of the beer cheese I was missing from my first-choice restaurant. It was the perfect lunch on this cold, snowy day, and I’m glad I didn’t eat it just to eat it yesterday between lunch and the Super Bowl.

The game sold out, so we were glad we got tickets, even after having to wait.

Ben fell asleep for most of the second half of the basketball game, which was especially good news considering how hot and loud it was in the arena.

The Austin Peay fans, who have been known to be over-the-top obnoxious, weren’t as intense as usual. Yes, they were loud, and, yes, they cheered for their team. But I didn’t detect the meanness that I have in the past. That’s good news. Behind us, there were a few especially funny Peay fans, one of whom kept saying he didn’t want to see B.J. Jenkins start scoring.

The Racers won and moved into first place in the conference, even without Jenkins getting hot. And it wasn’t even as close as we expected it to be.

And we had a good time with our friends.

Yes, there are plans for a return road trip next year. It will involve leaving Murray earlier, eating at Blackhorse Brewery first, then maybe shopping at Target, getting tickets earlier and driving the mini bus. 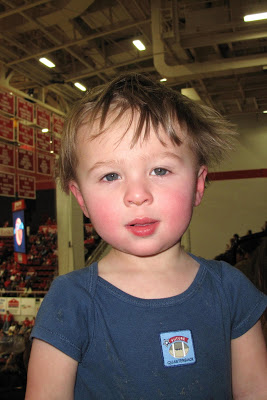 That’s some bed head, which was helped along to its craziness with some macaroni and cheese from dinner earlier in the evening.