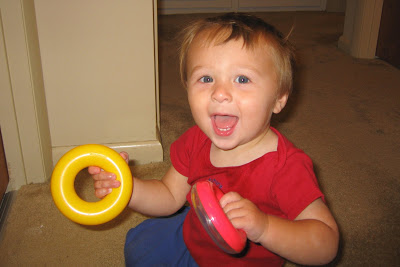 This picture is actually from about a month ago, when I was sick and
Sarah graciously invited Ben over to play with Davey one morning.
But that same happy facial expression illustrates our day. Plus I
realized it was sitting on my computer desktop, waiting to be shared …

_______
Today was a hooded sweatshirt and rain boots kind of day. Other than dropping Cate off at school and then picking her up 3 hours and 45 minutes later, I didn’t have a plan beyond knowing I wanted to be warm and have dry feet.

On the way to take Cate, Sarah texted me to say she and Davey were going to the story time I had enjoyed a couple weeks earlier when Cate was out of school for Election Day. It’s one those come-as-often-as-you-but-no-sign-up-required events that is as good for the moms as it is for the kids. I had just been thinking about what I wanted to do while Cate was at school …

I needed to pay some property taxes for our company.

I could shop for a smaller Christmas tree that I’m thinking I’ll put up on a small table in the corner of our living room. Honestly, I don’t want to spend weeks dealing with Ben’s small hands grabbing ornaments, lights and artificial branches or his mouth inserting of the previously mentioned in his mouth. Cate was 7 months when the Christmas tree was first in her reach. But she was never into everything like Ben is. I know, a stereotypical boy-girl difference.

I could go home and start some laundry.

I have two packages that need to be returned to Diapers.com and Amazon.com via UPS, but carrying two boxes of diapers [that Ben outgrew sooner than I expected …], an umbrella and an almost-1-year-old into the UPS Store on a rainy day is more than I really want to handle.

I have two baby gifts to drop off. Again, present, umbrella, baby … too much times two.

So I text Sarah back [at a red light, of course …] to say Ben and I will be at story time too. Then I remembered Jaclyn said she and Sabrina were coming too. Alright, an impromptu plan was in place for my morning.

After dropping Cate off, I paid the company’s property taxes and then went to story time. Toward the end of the 90-minute time of playing, listening to a story, crafting [at which time Ben and I opted for more playtime …] and snacking. The graham crackers apparently only whetted my son’s appetite and then my pregnant friend Sarah mentioned she was hungry.

Continuing with the impromptu planning, I asked Sarah if she and Davey would like to get some lunch with us. We decided upon Taco John’s and moved our conversation there while the four of us ate quesadillas and drank our drinks from a straw. Yes, seriously, I don’t remember Cate being able to drink from a straw at this point, but Ben and Davey both can.

Our boys’ achievements in their first year of life were only part of the conversation. I left with a full heart, thankful for a friend who prompted some impromptu planning on a rainy day.