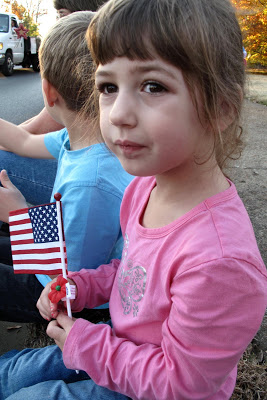 We went to a Veterans’ Day parade, which is absolutely no surprise to those who know about Murray, Ky., and its obsession with parades. If a town can truly have an obsession, this town’s is its dollar stores and parades.

Both are typically nice additions to life.

Take today’s parade, it’s something to do at 4 o’clock on a Thursday afternoon. And it’s a way to spark a civics conversation with a 3-year-old who likes to know what’s going on.

Just today we discussed freedom and Thanksgiving, although she was more familiar with the pilgrims [“I made a pilgrim at school. A girl one.”] than the Indians [“I don’t know who they are.”].

And let’s not forget the dollar stores. I’ve actually shopped at two of the four [and that’s not counting Big Lots …] just this week. Yeah, I know. And I’ve been two Walmart. Twice. I’ve had a holiday urge to craft and shop, so I’ve been exercising some creative freedom.

Ah, yes, back to freedom.

Hope you enjoyed your Veterans’ Day. Maybe it got you off work. Maybe it caused you to make a pointless trip to the bank and post office. Maybe it took you to a parade. Or even a dollar store. Wherever you were and whatever you were doing, I hope it included celebrating those who have served, are serving or will serve to protect our freedoms. And I hope you praised God for his freedom that surpasses all the other good things in our lives.