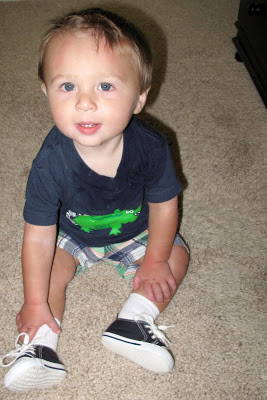 Here we are. Double-digit months. Makes him turning a year seem just around the corner, which, really, it is. Two months. In most ways, these 10 months have flown by. And in every way, I’m so thankful to be out of the newborn stage. I love watching Ben’s personality develop, seeing him discover new things and witnessing sibling interaction.

* has seven teeth and I can see the eighth one trying to break through.
* pulls up, often. But hasn’t tried walking much. And that’s OK with me.
* says “buh-bye” inconsistently when someone leaves, when we walk out of a store or when I lay him down. He does not say it on command.
* wore shoes for the first time last week.
* tries hard to keep up with Cate.
* likes to get into new things, which has resulted in some hand slaps, which usually result in tears. And while I don’t like to see my boy sad, I also didn’t like him laughing when I’d tell him “no” in a firm motherly voice.
* loves his bottle [and holds it like a pro!] and barely tolerates baby food. The boy wants to eat what everyone else is eating and when everyone else is eating.
* makes much noise.
* takes two naps. Sleeps 11-12 hours at night.