Greg and I prayed together yesterday morning. He said something about me having patience. I guess he knew something I didn’t know. But I should have known how my day would have gone as soon as I heard those words.

I spilled my own Diet Dr Pepper in the first hour of my morning. It got all over the laptop cord, but thankfully the spill somehow avoided the actual laptop. Then later in the morning, I thought it was a good idea to let Ben attempt a sippy cup, so I poured some formula from a bottle to the cup … and all over the counter and my foot.

We met Greg at Quizno’s, the lunch place I chose because a free kids meal comes with an entree purchase. I was holding Ben, the Floppy Seat that I put in the high chair because my son chews on everything and the diaper bag while making sure Cate stayed close and didn’t walk off with the chips we hadn’t paid for. All was well, I managed to pay for our food. All before Greg walked in the door because I was a few minutes early because I was hungry. I think running in 100-degree weather makes a girl hungry.

Anyway, I realize when I’m finished my Honey Bourbon Chicken sandwich that I paid too much for our food. I looked at my receipt and, sure enough, the lady charged me for my free kids meal. I went up and they corrected it, no problem. Just an extra step in my day.

After lunch I headed to Kroger because I had forgotten chicken when I was there Monday and I wanted to make General Tso’s chicken. Yeah, an important ingredient. I suggest to Cate that she and Ben sit in the two-seater car cart, which she used to want to do when Ben was still in his infant carrier. But now that he’s sitting up like a big boy, I thought it might be a good day to try it.

I have to say, grocery shopping was the best part of our day … 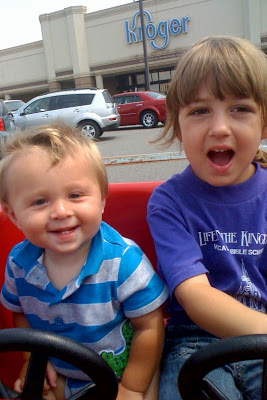 Ben watched Cate “drive,” and then figured out that he could too. Ben liked sitting up with his big sister. And Cate liked being close to her little brother. There was no complaining or whining.

We came home for nap time. Earlier in the morning, Ben had followed me around with his ever-improving crawling skills while saying “mamamamama” in baby whine. Cate had been acting tired, but thankfully my 3-year-old girl can express her feelings a little more clearly than my 8-month-old boy. I figured nap time would be a good break in the day … for everyone.

Well, it didn’t last as long as I had hoped and both kids woke up whiny. We tried going on about our day … them playing in Cate’s room while I organized some clothes they had outgrown in recent months. That didn’t last very long. I sent Cate back to bed. I fed Ben and then put him back to bed.

Round two of nap time actually happened. Well, Cate would tell you it was “rest time.”

Back to General Tso’s chicken now that I had chicken. I get out the recipe and realize I’m missing the chicken broth that is listed first. Apparently I didn’t really comprehend this recipe when I read it before I went grocery shopping … either of the two times this week! Alright, regroup. The good thing about having meals planned is I should have the ingredients on hand for multiple meals. Black bean tortilla back and Spanish rice it is.

While preparing dinner, I also was feeding Ben. I started mixing the canned tomatoes, black beans, enchilada sauce and spices to the meat and onion mixture … and I realized just as I dumped the last of the tomatoes that I doubled the amount that went into the two batches I was making. Like each recipe called for one can, and I used a total of four cans. Twice the total amount for my two casseroles.

Moving on to Spanish rice. I’m cutting up the green pepper, red pepper and onion to mix with the rice. Then I realize I don’t have any diced tomatoes because, well, they are all in the black bean tortilla bake. So I add extra tomato juice hoping that will help the flavor stay the same.

The black bean tortilla bake turned out fine and the Spanish rice was so-so. At least we had dinner on the table. And my husband who had prayed for my patience was home to help me with the rest of the day.