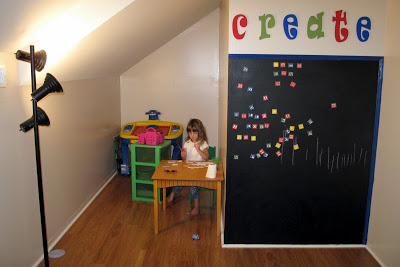 With an ink pad in her hand the other day, Cate had a plan for her afternoon: “Momma, I want to scrapbook, just like you.”

I’ve been slowly working [You know, between loads of laundry, planning and cooking meals, making sure Ben doesn’t chew on anything dangerous, playing with our friends …] on a craft space for her because she does like to color, cut and stamp. There is even a magnetic chalkboard, a project that was recently finished even though I had it in my head since before we actually moved in. Apparently she appreciates my idea because she uses both a desk and table in a nook of our playroom and was excited about the plastic drawers I got her today at Walmart.

When she woke up from her nap this afternoon and realized I hadn’t organized her crayons, stickers, colored pencils, scissors, stamps, coloring books and paper like I mentioned I might, she wanted me to help her with that project … now. I didn’t bother explaining how her 9-month-old brother didn’t nap as long as I expected/hoped. I don’t think she’d understand the translation about my lack of productivity.

So we organized. And then she returned to her nook, with ideas in her head. 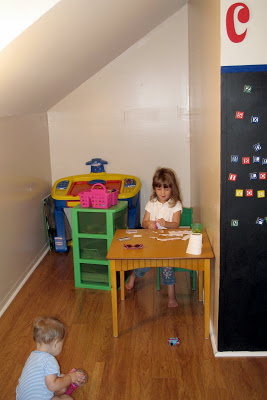 Apparently ignoring my assessment of the situation, she takes the matter into her own hands: “Ben, go chew on your toys.”

He continued investigating the pink princess wand. And she went back to using the scissors I found for her in a box of craft supplies I don’t really use these days. You thought I’d given her quite a treasure when I showed her how they cut in fancy ways, like waves and zig-zags.

All is well in the creative nook.