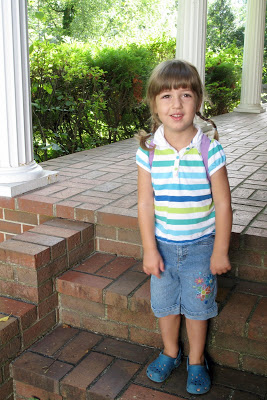 We’d been talking about preschool. And practicing her teachers’ names after meeting them last week at an open house. (She has one teacher two days and another teacher one day — a fact she seems to strangely grasp.) She certainly isn’t shy, even if it takes a few minutes for her to warm up. She’s independent.

But I still didn’t know how dropping Cate off at preschool for the first time would go. Other than a few outings with Gran-Gran and Grandmom and one Saturday VBS with Aunt Angela, Cate hasn’t really gone anywhere without either Momma or Daddy with her.

I didn’t expect drama, but I wasn’t sure what to expect.

She held me hand as I also carried Ben and the three of us walked into the preschool a few minutes early. I signed her in, and then we started down the hallway to her class. Miss Amber was walking toward the classroom too, so we walked alongside her. She asked Cate if she was ready for today. Cate told her teacher that she brought carrots and broccoli for lunch. I suppose that meant she was ready.

We walked in the classroom. After putting her lunch in the fridge, her extra change of clothes in the cubbie and her backpack on the hook, she spotted some blocks toward the front of the classroom. “Miss Amber, I play with those blocks?” After permission to proceed, she was off.

I chatted with another mom I had met before and then decided all was well. I had to walk up to Cate to give her a good-bye kiss. She kissed me, then Ben, and told us she’d see us later. The clock in my van said 9:04 when I got back in, only four minutes into the official preschool day.

I almost cried. Not from sadness. But because I saw my 3-year-old girl with pigtail braids being confident, comfortable and grown-up this morning. And I was proud of who she is becoming.