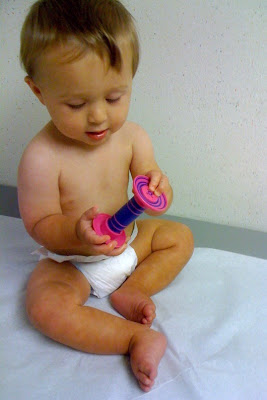 I did feel bad when the nurse practitioner said he has some fluid in his ear from congestion draining. He’s cutting two teeth, so I thought the runny nose was associated with that, as it was the other two times he worked on two teeth. Apparently he may have had an ear infection. But he never had a fever, so I didn’t suspect anything other than teething.

Did I mention he puts everything in his mouth? Today’s toy of choice at the doctor’s office was the wooden tongue suppressor. She even let him bring it home with him.

_______
Cate was the same height, putting my girl in the 95th percentile, and weighed almost 5 ounces less when she was nine months.