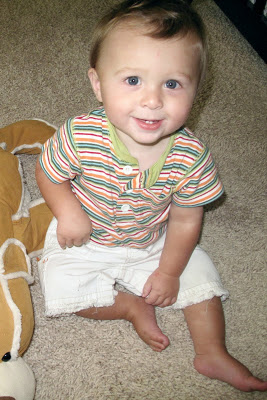 I started thinking about Ben’s first birthday party the other day, and then I started sweating and decided I’d wait until fall (and cooler weather!) before I really started making plans. His birthday is the week of Thanksgiving, which means the holiday season will be upon us in three months.

But, for now, Ben is 9 months old. And he keeps me on my toes, that’s for sure. Mostly because he puts EVERYTHING, seriously, in his mouth. He also …

* has four teeth, will likely have his fifth soon, and is working on plenty more.
* drinks three to four 8 oz. bottles a day and eats baby food and other mushy food, like yogurt, applesauce, pieces of fries and pieces of bread.
* likes to pull hair. Especially Cate’s.
* pays more attention to the TV than Cate ever did at this age. Probably because his sister has on some Veggie Tales or Disney movie that is more entertaining than anything I’d turn on [you know, like “Dawson’s Creek,” “Grey’s Anatomy” or “Family Feud” …] when it was just me and one baby.
* makes much noise and likes to be on the move, whether it’s in the car, in the stroller or on his knees.
* pulls up some, usually stopping at his knees. No rush.