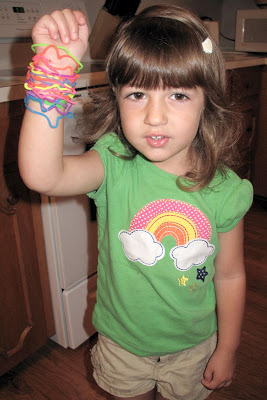 When I first heard about “silly bands,” I had no idea why people would care about shaped, rubber bracelets. Of course, who knows why slap bracelets were ever cool. But then I realized if you [the general you, not you, specific reader …] had a green silly band in the shape of a duck that no longer looked like a duck when it was on your wrist, then it would look like a duck once again when you took it off your wrist.

Somehow that’s neat to me.

Apparently my 3-year-old girl think it’s cool too. Of course, she thinks my hairbands make good bracelets too. Or even just rubber bands. She’s been into accessories for quite some time now.

But sometimes she doesn’t wear all 30-something silly bands she owns. Somehow, apparently, it can be entertaining to just play with them and sort them and jumble them together in a fist.

Right now they are all — animals, farm animals and sea creatures that came in packages of 12 for $1 at Walmart — sitting in the cup holder of the double stroller because that’s where she put them when she decided wearing 32 [Yes, she should have 36, but a couple snapped and I saw those two green ducks sitting on the kitchen table recently …] bracelets was a bit much in 96-degree weather.

Thing is, she’ll remember exactly where they are. Both the pile and the two green ducks.