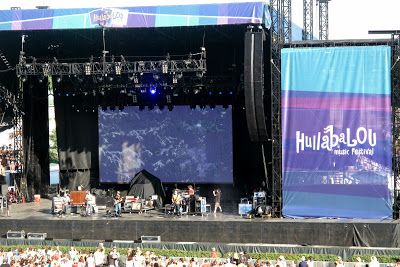 In addition to Holiday World, I went to HullabaLOU on Sunday night. HullabaLOU, in case you’re wondering, is a new music festival that was successful enough over its three days that Louisville plans to host it again. And, you know me and words, I have to say … I love the name. Hullabaloo is a great word for the atmosphere, and then to localize it is brilliant.

I was mostly excited about Zac Brown Band, who played between the new-to-me Avett Brothers and Dave Matthews Band, who always takes me back to 1997-2000, even with his “new” songs. Turns out, Zac Brown Band ended up being my favorite. I wished they had played longer than the 1 1/2 hours. 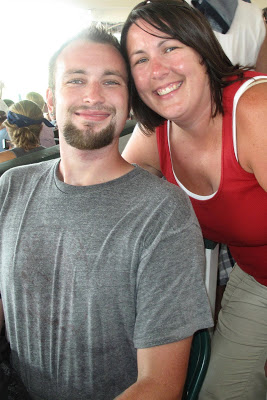 That’s my brother and me. Yes, it was hot out, even in the shade of Churchill Down’s grandstand.

And speaking of hot, Zac Brown wore his trademark wool hat. Not exactly appropriate for the heat and humidity. But, hey, at least he’s consistent.

The almost 2 1/2 hours from Dave Matthews and his band was typical DMB, which by no means disappointed me. But I like “classic” DMB songs because those are the ones I can sing along with as a I reminisce. Thankfully, Dave threw in some classics for me. And I enjoyed his “new” stuff live.

In fact, both Zac Brown and Dave Matthews [and their talented bands!] are fabulous live. So fabulous that when Dave invited Zac onto stage, I was thrilled. “All Along the Watchtower,” a Jimi Hendrix song, isn’t my favorite, but listening to those two sing and all those musicians play was quite a treat. Zac Brown even donned a second wool hat that appeared thicker. I think it had cooled off like 5 degrees, maybe to the high 80s, so maybe he was chilly.

Anyway, a friend wanted me to tell her what songs Dave Matthews Band played, so I thought I’d share the list with you …

Funny the Way It Is
You Might Die Trying

Stay or Leave
??
Crush
Don’t Drink the Water
Why I Am
Spaceman [I think …]
#41 [Followed by a 20-minute jam …]
Gravedigger
Lie on our Graves [with much jamming before finishing the song]
You & Me
Shake Me Like a Monkey