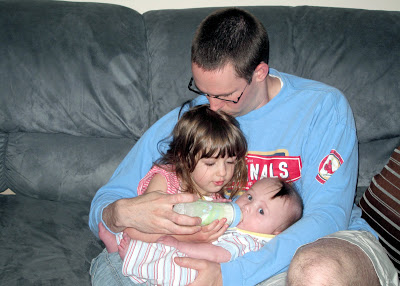 Even after 5 months, Cate often introduces Ben has “my new brother Benjamin.” It’s really sweet. And protective. And slightly possessive. I was joking the other day that she’ll be 15, meaning he’ll be 12 1/2, and she still be introducing him as her “new brother.” Of course, she still calls our house, that we’ve lived in for six months, our “new house.”

We’ll talk to Ben. Or say, “Hey, Cate, Benjamin is talking to you.” And she’ll point out that he’s not really talking and he’ll be able to talk when he’s bigger.

“When he’s bigger.” It’s a popular phrase from my girl, who turns 3 next week. According to Cate, when Ben is bigger, he will …

Ride in the big red car at the grocery store.

The other day I was babbling to Ben about how he’s getting bigger. And Cate corrected me: “He’s not bigger yet, Mommy.” No, I guess not. Not in the mind of an almost-3-year-old who sees the world as it is. Literally.

But, hey, he weighs 15 pounds. So he’s indeed gotten bigger. At least a little.