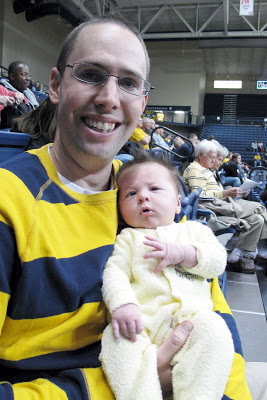 As I was feeding my 6-week-old last night at his fourth Murray State game, I was thinking about why I like sports. My own athletic ability, which has been limited to basketball and cheerleading in elementary school, one not-so-fun track season in middle school and four years of being a mediocre swimmer as a high schooler, certainly didn’t make me a fan.

My dad played collegiate football. My brother chose baseball and basketball from all the possibilities. My sister played soccer in college after choosing it over basketball in high school and met her husband, who played basketball at the same college, in an athletes study hall. My husband went to a small high school so he played all sorts of sports there and he continues to play pick-up basketball games on Sunday nights. Maybe loving these people made me a fan.

I like the atmosphere of sporting events. Well, don’t take me to a NASCAR race and hockey would only ocassionally be entertainment. But give me Major League Baseball game, college basketball, college football or even professional football game any day. I’ll watch those live or on TV. I like to watch the Olympics, mostly summer, on TV.

I like watching the athletes compete with intensity and then read and hear stories about them — mostly the good guys — before and after games. I like the enthusiasm, sounds and foods that go with sporting events. [Apparently the food part has rubbed off my 2 1/2-year-old daughter because she associates popcorn with both Murray State football and basketball games.] We’re thankful for Murray State’s games especially because it’s a fun way to be out in the community and support our alma mater.

And, maybe most importantly, watching football, baseball and basketball is something my family does together that promotes qualities of life — enthusiasm, hard work, teamwork, competition, winning and losing, camaraderie — I hope my kids learn and apply to everyday life. And this is just from watching the games. If they choose to play sports, that will be good with us. But no pressure from this sports fan.

Besides, you’ll never know where sweet moments between a big sister and her brother will happen … 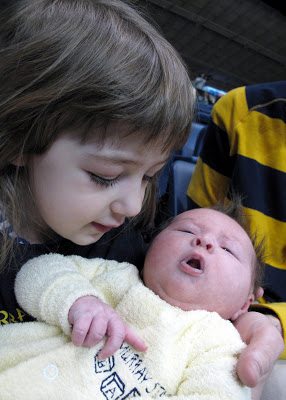 See, it’s not always a bad thing to be on the sideline.