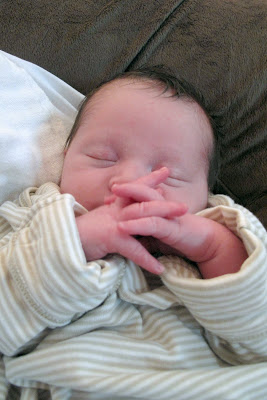 I love the way Ben often holds his hands.

We’ve been a family of four for two weeks. And, really, things couldn’t have been smoother. Cate doesn’t like Ben to cry and helps bring me blankets and diapers. She often gives Ben stuffed animals while he’s sleeping in the swing.

The last night have been excellent with Ben sleeping in four- and five-hour stretches. When we feed him late at night or early in the morning, he usually goes back down in his bed fairly easily.

My first trip to Walmart with two kids went well. Cate rode in the cart as usual and Ben slept in the sling I wore. “Do you have a baby in there?” two different women asked at separate times. I told them I did and then proceeded with an explanation that probably wasn’t necessary: “It’s cold out and I thought this seemed easier than bringing in the carrier, especially when I wanted her [meaning Cate] to be in the car too. Plus this way nobody is breathing on him.” Yes, it worked well, even though I never thought I’d be a mom who used a sling. Really, though, it only makes sense, especially when I have a toddler.

We used the sling [Thanks, Emily!] at two basketball games, both of which Ben basically slept through. If you’ve ever watched a game with Greg, you know our row wasn’t exactly quiet.

All of that to say, everyone seems to be adjusting well to being part of a family of four.