Do you remember the universal remote control Greg so graciously gave me last year? Although I still think he really bought it for himself, the remote is handy. That is until we misplaced it AFTER the move. Yes, AFTER. It made the 1.1-mile move and we even used it a couple times before misplacing it. Meanwhile, I was Christmas shopping, and I saw this remote … 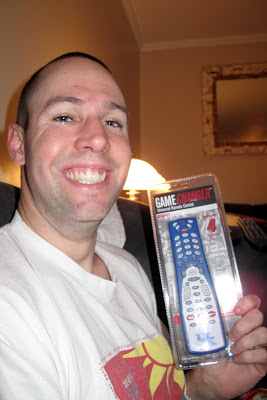 Yes, it’s universal and will simplify our life — yet, again! — from four remotes to one. Ah, simplicity. [Alluding here to Greg’s hint to me about last year’s remote: “It will simplify your life.”] PLUS, it’s perfect for any die-hard Wildcat fan. ESPN channels can even be programmed into the remote so you don’t have to remember whether it’s 3-0 or 3-2 you want to watch Wall dunk the basketball.

Continuing with the technology theme, Greg gave me a DVD player this year. Yeah, I know, romantic. But, really, I [indirectly] asked for it by saying I wish the XBox, which doubles as our DVD player, played burned DVDs so we could watch the “Dexter” episodes we have downloaded on the computer.

All of this to say, Greg was especially excited about the UK universal remote because I guess we’ll need two universal remotes to control all the electronics. Um, that sort of complicates simplicity, but, hey, whatever works, right? I guess we can quickly flip between Wall’s dunks and Dexter Morgan using just two remotes, and not five.