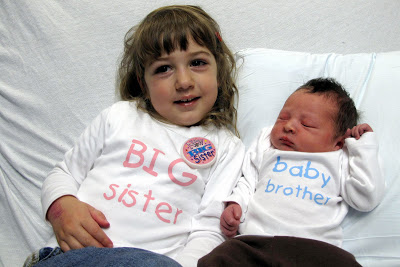 I’m going to answer the popular question: How does Cate like being a big sister?

Well, she’s 2 1/2 and Ben is [barely] two days old, so the verdict is probably should still be out. But so far so good.

She likes to hold him. In fact, the first time she met him, she wasn’t sure she wanted to give him up, even to Gran-Gran. We convinced her by saying she could sit right next to them. And she likes to know where he is and what he’s doing. Although the options for either are fairly limited, she asks anyway. She has already gotten me things [a blanket and burp cloth] and has helped feed him a couple of times. 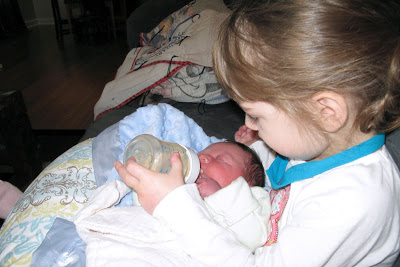 Moving to a new house and bringing a baby home seemingly have combined to produce this strange phase of hording her toys in a purse, bin and/or gift bag. I think she’s worried people are going to start re-arranging her stuff without telling her about it. Regardless, she’s had a big last few months — well, really, so have Greg and I — so a little hording is a minimal side effect.

Here’s to hoping she continues to like holding and helping her brother, even if she’s clinching a bag of My Little Ponies and plastic bracelets in the other hand.