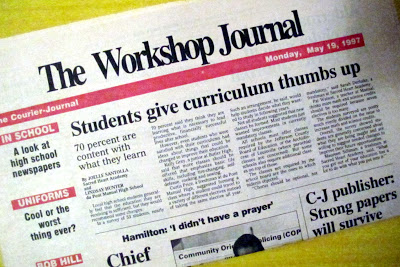 The finished product from The Courier-Journal High School Journalism Workshop that affirmed my decision to go to college for print journalism.

I learned Michael Jackson died yesterday as I scrolled through my friend’s status updates on Facebook. Although, admittedly, my mind wondered if MJ was Michael Jackson or Michael Jordan, I realized something newsworthy had happened.

So I went to Google News, where, sure enough, Michael Jackson’s death was the top news story of the moment. Yes, moment. The beauty of Google News is the constant updating of the headlines. Who needs a news cycle anymore?

Likewise, I learned Jodie Meeks was leaving Kentucky for the NBA Draft because many of my Facebook friends commented on the news in their Facebook status. And the Big Blue faithful helped again via Facebook when Coach Calipari made his decision to leave Memphis.

And remember that crazy ice storm? A Facebook friend shared his interpretation of the weather radar on Facebook. He warns of snow, and while I often remind him that I prefer summer sunshine, I appreciate the weather tips.

I worked at The Associated Press in Louisville on Sept. 11, 2001. We had three televisions, each turned to one of the major news networks, and access to the news wire. Updates were constant and guided us to do our jobs to cover the national event on a more local level for Kentucky.

As a college freshman, I listened to coverage of Princess Di’s death on the radio as my roommate and I drove back to our native Oldham County. The memory is a little foggy, but I’m pretty sure we listened the entire four hours.

I remember watching O.J. Simpson flee in his white Bronco on TV. It was like made-for-TV drama and real news collided right there and I could peel my eyes from any of it.

Stored in large Tubberware tubs are piles and piles of newspapers that feature my bylines. I understand the adrenaline that comes with finishing a breaking news story by deadline, or just a little after deadline, so people can have something tangible in their hands as they learn what’s happening in their community. I took seriously the responsibility of covering government meetings and court hearings, interviewing local leaders and featuring the details of a community when I worked at newspapers.

But my daughter — who prompted my decision to leave work there for responsibilities here — isn’t going to get her news like that. She’s going to grow up knowing Google is a brand name, but it can be a verb too. Her Facebook friends will help keep her informed.

And, really, I can’t blame anyone’s desire to know now.

And again in five minutes.

Because if something happens that people care enough about, we won’t have to wait until tomorrow’s newspaper shows up outside our door or even for the evening news. Just fire up the lap top or look at the BlackBerry.