I know Cate’s my daughter, but, goodness, she’s entertaining! 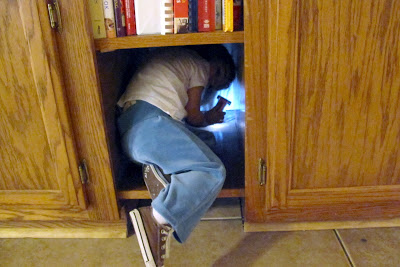 She used my book light to lead herself into this cubby in the kitchen. She managed to get her whole body in there.

Then, we went to Kroger. 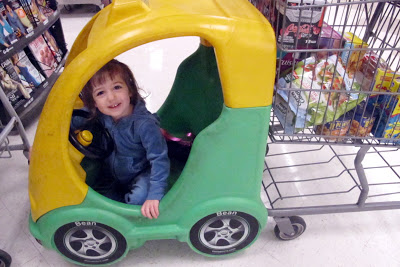 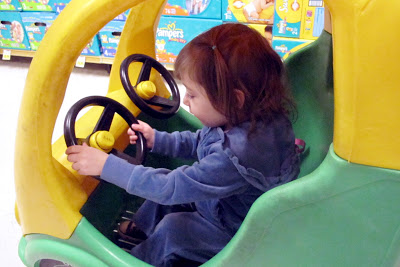 I want to say first that we go to Kroger at least once a week, if not twice. Usually we talk about the larger-than-life horse that is painted on the front window as we walk in. (You know, Murray State pride …) Then we talk about various foods as I put them in the cart. Sometimes she holds items or eats Goldfish.

But today as soon as we walked in, she noticed this cart with car attached to the front. With great enthusiasm, she said, “I drive. I drive.” Sure. I’d never thought to put her in it, but that was fine. So, she gets in and off we go … right into the apple display. Apparently mama’s driving wasn’t so effective. Once I get back on course, I run her right into the standing dispenser of produce bags and I get it stuck on the cart.

I started thinking that maybe letting Cate “drive” the car wasn’t a good idea because it was apparently really complicating my driving! Probably in effort to keep people from watching me run into more things, I figured out that if I pushed down on the handle bar while I pushed the car forward, I could off-set her weight in the front. I noticed the wheels closest to me weren’t touching because there wasn’t much in the basket yet. So, I solved the problem, kept the wheels on the ground, and proceeded forward in a much safer fashion.

Cate obviously was pleased with the outing because I lost count of how many times she said: “I driving. I driving.” Yes, you’re driving.

And a trip to the grocery will never be the same again.